In June, the world lost a musical legend with the passing of 73-year-old Ray Charles. But before his death, he was able to give his creative input and seal of approval to the biographical Ray, a film that's been more than 15 years in the making. This is pretty remarkable cinematic timing—his passing is still in the hearts of many, and now we have a fitting testimony to the man's life and 50-year musical legacy.

Charles isn't regarded so much as a songwriter as he was an innovator and a versatile performer. Here's a man who started his career as a jazz crooner, mimicking the likes of Nat King Cole and Charles Brown. He then easily shifted into rhythm & blues, leading into the dawn of rock 'n' roll. Later on, he fused R&B with gospel, and then country after that, eventually embracing middle-of-the-road pop. Referred to as "The Genius of Soul," Charles was more than a cover artist or a mimic. He was a bridge, breaking down musical barriers and making whatever he sang his own.

But Charles' legacy runs deeper than music. His life tells the story of a man who overcame not only racial obstacles in the mid-twentieth century, but also physical obstacles, going blind from glaucoma by the age of seven. Charles was also a shrewd businessman, looking for opportunities to further his career to the next level. A stipulation to his 1959 record contract with ABC-Paramount allowed him to retain his own masters, a deal "better than Sinatra's" that allowed him unprecedented financial control, yet ironically the reason most of his albums remain out of print to this day. And Charles was also the first black artist to refuse to play racially segregated concerts in the South, a stance that led to him being banned from playing in the state of ... 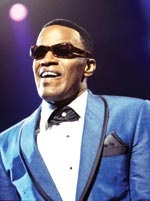