I tried hard to like Cellular, mostly because it stars one of my favorite actors, William H. Macy (Fargo, Magnolia). He gives one of the best and funniest performances of his career as a police desk sergeant Bob Mooney who is busy buying sea sponges and live algae facial masks in preparation to open a spa ("not a beauty parlor," as he likes to point out). Kim Basinger, who spends most of the 89-minute-long movie crying and talking to a phone, renders her character believably distraught. But neither Macy nor Basinger nor the intriguing setup nor the bursts of situational wit can rescue David R. Ellis's action thriller from joining the category of movies that are so bad they're good. I guess one can put it in more encouraging terms: it's a good bad movie.

Cellular is a roaming version of Phone Booth, the other thriller in which a phone connection is the protagonist's life line. No surprise there: the same Larry Cohen who wrote the script for Phone Booth constructed Cellular with an equally reckless abandon of logic.

A high school science teacher named Jessica Martin (Basinger) sees her son off to a school bus stop, and upon returning home, she is startled by armed intruders. Commencing a long string of improbabilities, they kill her maid the moment they enter the place. They kidnap Jessica and lock her in an attic of an unknown home. One of the abductors smashes the only phone in the attic. Alas, Jessica manages to put the shattered phone's wires together well enough to make a call. 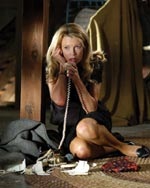 Kim Basinger is making the call of her life—literally

She gets through to Ryan (Chris Evans), a superficial twentysomething man who is trying to win back the good graces of a hottie who believes that he's an undeserving slacker. We find him on the Santa Monica Pier, where he is not the only one ogling the perfect-figured women in bikinis. So, clearly, are the filmmakers; and they make sure that we are too.

Initially, Ryan thinks Jessica's call is a prank. He reluctantly agrees not to hang up on her and to take his cell phone to a police station so she can explain her predicament to a cop. But when he arrives at the station and attempts to hand his phone to a desk sergeant (Macy), a riot breaks out on the ground level of the station. I know—it's L.A., and riots probably break out all the time at police districts in shady parts of the city. Okay, so maybe Ryan can take the phone upstairs, to the detectives? He tries, but, for reasons unsatisfactory to anyone with a brain, he can't reach anyone.

The detectives must have been raptured, so Ryan has to fill in for L.A. police department—at least until Sgt. Mooney (who in his entire career hadn't fired a gun) joins the pursuit. After Ryan learns that Jessica's captors are on the way to kidnap her son from his school, he rushes to rescue him, but fails. Then he must save an important piece of evidence that the bad guys are after and that the Martins have stored away. Even Jessica doesn't know what it is; she does know that once the abductors get it, they will kill her and her family.

Ryan hijacks cars and eludes the bad guys in traffic-stopping car chases. As he takes us from Santa Monica Pier to Los Angeles Airport to downtown, the contrived hurdles pile on. Too many times, Ryan jumps them with an inexplicable Bondian flair. We all know the U.S. airport security isn't perfect, but it's hard to believe that this amateur crime fighter can both steal an airplane ticket and get rid of a gun as he crosses the airport security check.

The most true-to-life moments are the most comical. In them, Not Another Teen Movie's Evans gives Ryan just enough awkwardness to make him believable. When his cell-phone battery is just about to run out of juice, he walks into a cell phone store. Unable to convince the legalistic clerks to let him cut in line to purchase a charger, he goes to his car to get a gun, then somewhat shakily aims it at them, asks for the charger, and pays for it.

Ryan illustrates the old truth that came home to us as a nation on September 11, 2001: that heroes are ordinary people who do not turn down an opportunity that requires courage from them. He transforms from a carefree beach boy into a hero quite spontaneously. As decisions are thrust upon ordinary people, they become heroes as they choose to defend those who cannot defend themselves. That's the moral of the story. Too bad the story itself just doesn't gel.

The film's abandon of logic is more of a concern than any unclean parts. The objectification of female bodies in scenes on the pier and the violence of the abductors may be inappropriate for younger teenagers.

Last year,Colin Farrell played a man stuck in a Phone Booth desperately trying to save innocent people from a sniper. Now, Chris Evans, William H. Macy, and Kim Basinger star in a variation on the same idea. In Cellular, Evans plays Ryan, a young man who receives a random distress call from a kidnapped woman (Basinger), who begs him to help her. Ryan proceeds to use his versatile little phone for clever endeavors to try and save her and her family. It sounds like little more than a clever, feature-length marketing ploy. But critics seem to be enjoying the film, even if they admit that it's rather shallow fun.

Michael Elliott (Movie Parables) calls it "an entertaining though largely implausible action/adventure film. Though flawed in its logic and plausibility, it is nonetheless clever in how it incorporates all the features and frustrations that cell phone users know all too well: Loss of signal strength, dying batteries, call waiting, and crossed lines all become inconveniences that take on life or death meaning as Ryan frantically tries to keep Jessica on the line."

Agnieszka Tennant (Christianity Today Movies) writes, "Neither Macy nor Basinger nor the intriguing setup nor the bursts of situational wit can rescue David R. Ellis's action thriller from joining the category of movies that are so bad they're good. I guess one can put it in more encouraging terms: it's a good bad movie."

"Cellular is a smart, funny, fast-paced thriller," says Tom Neven (Plugged In). "It contains positive messages about the strength of family, a mother's love and courageously helping total strangers, even at great personal risk. Unfortunately, a little sexual humor, a gusher of foul language and some explicit violence will probably cause many to hang up on this effort."

Andrew Coffin (World) finds that, despite the film's wild implausibility, there are still things to like. He writes, "The only question, with a film like this, is whether or not it will move fast enough, and include enough clever twists, to keep audiences distracted from the story's inherent implausibilities. Surprisingly, for most part, Cellular does just that."

1 of 4
Ryan (Chris Evans) gets the call that sends his life into chaosKim Basinger is making the call of her life&mdash;literallyMooney (William H. Macy) works the phones at the police stationWilliam H. Macy and Chris Evans