This year, Major League Soccer (MLS), the professional equivalent of the NBA or the NFL, is entering its tenth season and enjoying a steadily growing fan base. Soccer fandom in the U.S. hasn't yet reached the critical mass that it enjoys in the rest of the world, where "football" is often a rowdy obsession, but it has come a long way from the obscurity players labored in earlier in the century. That bygone era of U.S. soccer is the subject of the latest cinematic sports offering from the filmmaking team of David Anspaugh and Angelo Pizzo (Hoosiers, Rudy).

The Game of Their Lives tells the true story of the 1950 U.S. World Cup soccer team that pulled off a stunning upset over the top-ranked British team in the first round of that year's tournament in Brazil. The United States was so much the underdog that The New York Times initially refused to run the score, thinking it was a hoax. It's a story that deserves to be told, but, unfortunately, The Game of Their Lives doesn't quite do it justice. 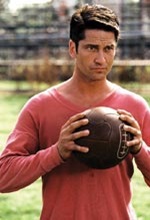 The narrative centers largely around the interpersonal dynamics of the team, comprised of a somewhat ragtag bunch of players from The Hill, a neighborhood of Italian immigrants in St. Louis, and a more refined contingent from the East Coast. The two camps fling a few ethnic and class barbs at one another before getting down to the business of figuring out how to win (or at least not look really bad while losing). In the process, two leaders emerge—halfback Walter Bahr (Wesley Bentley, most notable for his role in American Beauty) for the Yanks and goalie Frank Borghi (Gerard Butler recently of The Phantom of the Opera and Dear Frankie) for the boys from The Hill. Together they rally the troops, convince Haitian immigrant and dishwasher Joe Gaetjens to join the team, and remind us all that America's strength is greatest when its diversity is embraced.

Though the action soon leaves St. Louis as the team travels to New York for training and then on to Brazil for the tournament, it's The Hill that provides the emotional anchor for the film as we're introduced to the players and their wives and parents (aside from Walter, the East Coast players are largely ignored). The neighborhood is a Norman Rockwell painting in cinematic relief, and is rife with cliché, but it sets an appropriately earnest tone for the rest of the film's speeches about making the effort even if you don't win and being proud to represent the United States. 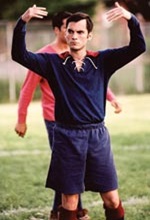 Wesley Bentley in the role of halfback Walter Bahr

The retreating shadow of WWII looms in a few places—one player doesn't want to get on the plane to Brazil because of what seems to be war-related trauma, and several players are identified by their military rank and honors in one moving scene—and if The Game of their Lives wanted to add more nuance to its narrative, this would surely be fertile soil. As it is, the movie strikes one or two notes that can be summarized as, "I'm proud to be an American," and "Learn to work together." Those are certainly good sentiments, but they wear thin after a while.

Thank goodness for the soccer! 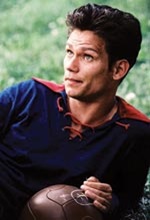 Fans and soccer neophytes alike are sure to enjoy the sheer athleticism displayed on the fields in this movie. Many of the actors have obviously spent much of their own time playing the sport, and watching them play the game provides some of the film's most enjoyable moments. I think it would have been helpful had the moviemakers incorporated some sort of narrative device that provided moviegoers with a little more insight into the game itself (what's the difference between a fullback and halfback for example; we are still Americans, after all, and most of us are newcomers to the game), but explanation aside, since watching the movie I've looked into getting tickets to a game of my local MLS team, the Chicago Fire.

The Game of their Lives doesn't have the intensity of Rudy, or the emotional resonance of Hoosiers, and that's a shame because soccer is a game with intensity and emotion in spades. But this will still be a treat for those soccer fans (and friends of fans who get dragged along) who have yet to see their favorite game given its due on the big screen. This won't be a classic soccer movie when all is said and done, but it's a start.

Rated PG, The Game of the Lives is almost perfect for the Little League set. The players are seen drinking and smoking and one is slipped a mickey to calm him down before a plane flight, but it all seems vaguely innocuous. Of greater concern is a storyline line involving Haitian immigrant Joe Gaetjens. He practices Voodoo (he does a little dance and prays over some beads) and one of the Roman Catholic characters is uncomfortable with this (despite Gaetjens' statement that he has "much respect" for the Catholic faith). It makes the Catholic player look provincial and he eventually gets schooled in tolerance. It's a very minor element in the movie, but notable nonetheless.