Last year, David L. Robb wrote a book called Operation Hollywood, in which he exposed how movie studios eager to borrow real military hardware for their explosive entertainments—not just from the Pentagon but from foreign armies, as well—will gladly make changes to their scripts in order to cast those nations and their fighting forces in a positive light. Naturally, when the army brass participate in the making of a film, they are looking at the film not as art but as a potential recruiting device, and the films made with their co-operation can safely be regarded as at least a mild form of propaganda.

As with the Pentagon, so with the United Nations. Although the UN building is over 50 years old, no film has ever been shot there before, despite requests from revered auteurs like Alfred Hitchcock. The powers that be have made an exception, however, for Sydney Pollack, whose first directorial effort in several years, The Interpreter, is now the first movie ever filmed in that building's General Assembly Hall and various other hallowed places. And as we might expect, the film is loaded with messages, some less subtle than others.

This, no doubt, is what attracted the increasingly self-serious Sean Penn to the film. Penn can be a remarkably good actor, even if there is something monotonous in the way he goes from one depressingly maudlin role to another, but in recent years he seems to have lost all sense of proportion, whether he is slapping Chris Rock's wrist at the Oscars for making good-natured jokes about Jude Law, or chastising reporters for offending against the very nature of art when they point out the parallels between Martin Scorsese's Taxi Driver and Penn's own The Assassination of Richard Nixon. So to see him slumming in what could otherwise have been another popcorn-pushing conspiracy thriller is something of a shock.

The dissonance is deepened further by the fact that Penn's co-star is the glamorous Nicole Kidman, who has proved her arty, dramatic acting chops in films like Dogville and The Hours, but here seems to be in The Peacekeeper mode, dodging the odd threat to her life as she helps unravel an international mystery. Watching her, you think less about her performance than you do about the way her hair keeps waving around her face when she goes for a walk, or the way it hangs in front of her eyes, giving them a peekaboo sexiness that is just a little too fetching. You may even begin to feel sorry for the continuity people who had to ensure that her blonde locks fell across her forehead the exact same way every time they shot another take of something as simple as a conversation with Penn. And more than once, you may wonder what on earth these two people are doing in the same movie.

Ah well, at least the differences between these actors do make it easier to believe that their characters would be so naturally at odds with one another that they would have difficulty trusting and understanding each other. Kidman plays Silvia Broome, a French-English interpreter who also knows a rare African dialect spoken by the people of Matobo, a fictitious African country that appears to be based on Robert Mugabe's Zimbabwe. As if to accentuate how special this film is for getting access to the UN, it begins with a sequence that underscores the building's tight security; when a single metal detector goes on the fritz, everyone is told to evacuate immediately. Silvia leaves a bag behind, and comes back late in the evening to fetch her things. And whilst there, she overhears what sounds like a Matoban plot to kill the despotic leader of that country during his upcoming visit.

Tobin and Silvia on the case—well, sort of

Enter Tobin Keller (Penn) and Dot Woods (Catherine Keener, whose sarcastic asides provide nice comic relief), two U.S. Secret Service agents who are assigned to protect the foreign dignitary when he arrives. (At one point Penn stands behind the Hall's main podium in a shot that would have been ripe for spoofing in Team America: World Police if the latter film had not been made already.) Tobin distrusts Silvia from the beginning, and his suspicions are fuelled by a Matoban ambassador (Lou Ferguson) who sends him evidence that would appear to link Silvia to the rebels of that country; the fact that Silvia makes secret phone calls and sends urgent e-mails to mysterious friends also raises a few alarm bells. 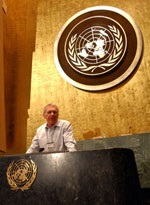 The problem with all this sneaking around is that it is rarely ever all that suspenseful. After all the twists and turns we have come to expect from thrillers these days, The Interpreter is almost too linear, too straightforward. The film introduces new mysteries here and there, only to resolve them pretty much immediately. (Who was that guy wearing the mask in Silvia's fire escape? Oh, never mind, he's dead now.) The one genuinely interesting sequence—a nervously amusing bit where three agents tracking three different people all coincidentally end up on a bus together—will be diminished considerably for anyone who has already seen the film's trailer, which gives away the climax to this part of the story.

It didn't have to be this way. Pollack's last bona fide hit was the tense nail-biter The Firm, starring Kidman's then-husband Tom Cruise. But that was 12 years ago. Since then, the only other films he has directed are Random Hearts and Sabrina, both of which played no small part in turning Harrison Ford from a dramatic action hero into a numbing bore. In addition, The Interpreter is conflicted by its need to promote a message of international cooperation even as it delivers the blockbuster goods, whereby we in the audience get our emotional satisfaction from watching one person act outside the law. If we were charitable, we might say that the film's climax captures the tension between justice and forgiveness; but given that the film is credited to no less than five writers, it's more probable that the cooks behind this particular broth just couldn't agree on what the point of it all is.

The Interpreter is rated PG-13 for violence, some sexual content and brief strong language. The sexual content is limited to a scene in a strip club, which underscores how bored the Secret Service agents are to be guarding a foreign dignitary who wanted to go there. Adults are shot by children packing machine guns, a few other people are shot, civilians are killed in a terrorist attack, and a man is found dead after bleeding to death in a bathtub.

Sydney Pollack has directed some memorable and impressive films (Tootsie, The Firm, Absence of Malice). And yet, moviegoers are still recovering from the disastrous Harrison Ford romance called Random Hearts. Pollack's new film The Interpreter falls somewhere in between, but it's closer to a "hit" than a "miss" amongst critics.

At the box office, it's a bona fide smash, topping the charts last week, largely due to the drawing power of its stars, Nicole Kidman and Sean Penn. Moreover, the thriller has built some significant buzz due to its unusual backdrop—the U.N.

Peter T. Chattaway (Christianity Today Movies) says, "The film is loaded with messages, some less subtle than others. The Interpreter is conflicted by its need to promote a message of international cooperation even as it delivers the blockbuster goods. If we were charitable, we might say that the film's climax captures the tension between justice and forgiveness; but given that the film is credited to no less than five writers, it's more probable that the cooks behind this particular broth just couldn't agree on what the point of it all is."

In her review, Annabelle Robertson (Crosswalk) reveals that she has worked for the U.N. "I know what a ridiculously incompetent organization it is. That its internal security officers are portrayed as being even remotely competent, when the U.N.'s international peacekeeping troops aren't allowed to fire their guns—even in the face of abject murder and mayhem—is laughable. And when country leaders who have committed mass genocide serve as heads of committees 'investigating' human rights violations—instead of being held accountable at The Hague for their crimes against humanity—it seems highly implausible that this organization is ever going to accomplish anything."

Regarding the film, she says, "Pollack is an excellent director … [but] while this film is mostly enjoyable, it lacks the heart-pounding drama a thriller should have. The script works, but it also lacks credulity on a number of levels."

Others were more impressed.

"Credibly written and superbly acted, The Interpreter is a taut thinking man's thriller," says Bob Smithouser (Plugged In). "Pollack has created a bustling head game that doesn't resort to pointless detours or red herrings that seem illogical upon reflection. In the end, everything makes sense—not just from a logistical, connect-the-plot-dots perspective, but from a human one."

Harry Forbes (Catholic News Service) writes, "If you can imagine The Man Who Knew Too Much, North by Northwest and The Manchurian Candidate rolled into one, you'll have a fair idea of what awaits you in The Interpreter, though the film is several notches below those distinguished forebears. Though the pacing is not consistently edge-of-your-seat variety, you won't be bored."

Michael Elliott (Movie Parables) says, "If it were easy to make an intelligent movie thriller, the world would be filled with them instead of the mindless, explosive-happy, stunt-heavy action pictures of which we are all too familiar. We can be thankful for … Pollack who excels in the genre. The movie is … helped by the setting in which it was filmed."

Mainstream critics are praising Pollack's direction as the finest aspect of the film.

Kevin Miller (Relevant) says: "The Interpreter is that rare film that is not afraid to tackle adult topics in an adult manner. The fact that it does so within the confines of a highly commercial, political-thriller formula makes its achievement even more amazing and delightful. Part message-movie, part big-budget thriller, The Interpreter is … an excellent example of how even a highly commercial film can impact hearts and minds for good, even if all you are looking for is a good night's entertainment."

Andrew Coffin (World) writes, "It's not that the film becomes especially didactic—it's that it lazily takes its underlying assumptions for granted. How well Silvia and Tobin's relationship and, really, the climax of the film resonates with viewers will depend largely on how closely they identify with Silvia's faith in the idealized international community represented at the UN." But he admires "some well-constructed action scenes" and "attractive cinematography."

1 of 4
Nicole Kidman as Silvia BroomeSean Penn as Secret Service agent Tobin KellerTobin and Silvia on the case&mdash;well, sort ofDirector Sydney Pollack and his crew had unprecedented access to the UN building