Opening nationwide next week, the Paul Weitz comedy stars Dennis Quaid, Topher Grace and Scarlett Johansson. We had a chance to catch up with them at a recent press event in L.A.
By Jeffrey Overstreet |October 29, 2009

A recent newspaper ad for a business school stressed that its program teaches "another way of doing business"—meaning that they also teach ethics, an element missing from the concerns of most business schools. Enron, Martha Stewart—dirty business is a hot topic, and it's no longer unusual for familiar corporations to make headlines when their shady business practices are investigated. People are beginning to think that perhaps "dog-eat-dog" is not a desirable workplace dynamic.

In Good Company—the new comedy from Paul Weitz, director of About a Boy—is a film that examines the current climate of dehumanizing business practice, challenging us to revise the way in which we set and pursue our goals and dreams. The film, currently playing only in New York and L.A., opens in wide release on January 14, when Christianity Today Movies will post a full review. Film Forum will include a roundup of other critics' observations the following week.

Weitz's movie is the latest in a series of recent features that pose questions about the difference between animal behavior and "higher" behavior, the call of conscience. Kinsey, Collateral, Closer, We Don't Live Here Anymore, and other recent releases portray people behaving selfishly and recklessly in the arenas of sex, business, and relationships. Some of them suggest that the "freedom" of amorality is fulfilling rather than damaging. Not this film.

(NOTE: The following involves plot points from the film that could be considered mild spoilers.)

In Good Company features Carter Duryea, a young and ambitious business mogul played by Topher Grace (That 70s Show). In one scene, he's staring at a goldfish swimming in circles in a bowl, and his mournful gaze shows that he can ...

Tags:
None
Posted:
October 29, 2009
More From: By Jeffrey Overstreet 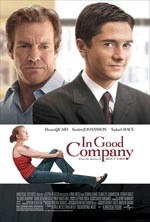