That's the question we posed to two Christian filmmakers on both sides of the issue. We initiated an e-mail debate between them, and while there were no easy answers, the lively exchange is instructive. Part 2 of 4.
July 12, 2005

Part 2: The Moral of the Story

We kicked off yesterday with Part 1, where both parties essentially presented their opening positions on the topic. The debate steps up a notch today with Part 2 …

Let me address some of the direct questions you've posed, then I'll delve deeper into my position.

First, I did not say, nor did I intend to imply, that Christian filmmakers should hide their faces or their faith from the audience. That would be disingenuous and a terribly unsatisfying experience. When I say "Christian themes," I mean that filmmakers can incorporate things like quoting Scripture in dialogue, though perhaps not citing chapter and verse. ... 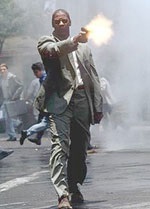