That's the question we posed to two Christian filmmakers who were coming from two sides of the issue. We initiated an e-mail debate between them, and while there were no easy answers, the lively exchange is instructive. Part 3 of 4.
July 13, 2005

Part 3: The Recruiting Power of Film

In yesterday's Part 2, the debate ranged from what the gospel should "look like" in a movie to exploring the Holy Spirit's role in conveying the message. In today's Part 3, the debate continues, including an exploration into whether "Christian" films are actually recruiting tools …

As a freelancer, I do a lot of work for churches, and I would consider that work "Christian." But when I write or design something for a secular organization, I do that work with excellence and unto the Lord—but I don't necessarily consider the end product "Christian" in nature. I don't think it's possible to make Christian ... 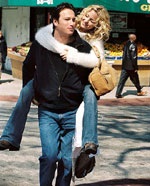