It goes without saying that Bewitched owes a lot to the 1960s sitcom that inspired it. Fans of the show can rest easy—Nicole Kidman proves perfectly capable of the magical nose-twitching that made Elizabeth Montgomery everyone's favorite televised witch.

In recent years, we've seen far too many episodic television shows pumped up to forgettable, feature-length versions. Writer/director Nora Ephron (Sleepless in Seattle, You've Got Mail) deserves kudos for her smart game plan. She might have re-contextualized characters like Samantha the witch, her bumbling husband Darrin, and her imperious mother Endora, in contemporary surroundings (The Honeymooners). Or, she could have "spiced up" the old mix with today's too-dirty-for-prime-time humor (Starsky and Hutch). Instead, she conjures a premise that captures the spirit of the original while developing a new and engaging scenario.

Thus, Bewitched is just as likely to remind viewers of other popular big screen comedies, and it borrows ideas from several. Like the hero of Groundhog Day, Isabel the witch (Kidman) has the capability of reliving situations and correcting her mistakes. And, taking a note from Bruce Almighty, Isabel manipulates her circumstances with godlike powers—even scrambling the speech of her love interest, Jack Wyatt (Will Ferrell) when he doesn't cooperate—until she learns that that human limitations might be a good thing after all.

But there's another film that Bewitched resembles in surprising ways: Wim Wenders's Cannes-award-winning masterpiece Wings of Desire. Like that film's central character, an angel named Damiel, Isabel walks amongst troubled human beings, mystified by their limitations, trying to imagine how it would feel to be one of them. One question in particular becomes an obsession: What would it be like to fall in love?

Isabel, a magical flibbertigibbet, is seeking romance in the kingdom of artificiality—Beverly Hills. She's determined to win love honestly, unlike her philandering father Nigel (Michael Caine), a suave spellcaster who deceives women with enchantments and trickery. Nigel thinks Isabel isa-bonkers; after all, he seems satisfied with his self-gratifying love affairs. (Caine, who played the original Alfie, is once again perfectly cast as an insufferable seducer who learns lessons the hard way.) But Isabel wants to be done with potions and power plays. She wants human experience and all of its complications. She wants to be loved for who she is, to be needed instead of merely desired. In the aisles of Bed, Bath, and Beyond, she watches a husband and wife argue about home improvements, and enviously declares, "I want to argue about paint!"

Eventually, like Wenders's curious angel, Isabel takes the plunge, and awkwardly attempts to pass herself off as a typical human being. Soon, she's hanging out on movie sets, just as Damiel did, and falling for a show business personality whose career needs a jump-start, just as Damiel did.

That show business personality is Jack Wyatt (Ferrell). Jack's been trying to salvage his unstable career, hoping to avoid becoming "the lower right square on Hollywood Squares." Cast as Darrin in a new Bewitched television series, he's seeking a new Samantha—someone who'll ensure that the spotlight remains fixed on Darrin. Thrilled by his discovery of Isabel, Jack brings her to the set, where she charms the discouraged filmmakers. (Yes, we're served another example of that tired cliché—the montage of bad auditions—and it's surprisingly unfunny.)

Isabel just wants to experience real love, like a mortal—and Jack (Will Ferrell) is her man

Even though Nigel objects, saying that Bewitched is "an insult to our way of life," Isabel's willing to play along, hoping it'll earn her a chance at true love. She's a natural at playing a witch—go figure—and that makes it difficult to repress her control-freak tendencies. Like a smoker trying to quit, Isabel repeatedly declares, "That was my last thing as a witch!" Before long, Jack's storming about in a supernaturally amorous frenzy, not unlike the recent, reckless, lovestruck exhibitions of Tom Cruise. Meanwhile, Nigel becomes distracted by Iris (Shirley McLaine in feather boas, vamping up a storm), the silver screen diva playing Samantha's mother Endora.

Ultimately, Isabel will learn not only the challenges of true love, but also that she is not the first to make "the big switcheroo"—just as Damiel discovered in Wings of Desire.

But that's where the similarities with the German art-film masterpiece stop. Wenders's film was a ponderous journey, an ocean of spiritual inquiry, and by comparison, Bewitched is more like a puddle. But puddles can be fun for splashing around in. If you're looking for a movie that will turn your brain off instead of on, you could do far worse. Captured colorfully by cinematographer John Lindley, production designer Neil Spisak, and costume designer Mary Zophres, Bewitched is an old-fashioned, relatively inoffensive comedy. Even though Ephron surrenders her inquiry into human experience and settles for screwball situational comedy and Hollywood sentimentality, her cast provides pleasant amusement for about 60 of their 98 minutes. Is that enough bang for your summertime moviegoing buck? You decide. 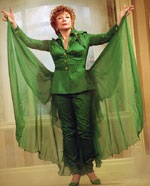 Most of the highlights belong to Kidman and Ferrell, who invest this mediocre material with inspiration and energy. Kidman is rarely given permission to turn loose her inner Loony Toons, but here she fulfills the potential for comedy that she demonstrated during the zanier stretches of Moulin Rouge and the outrageous Saturday Night Live skits she performed with Mike Meyers back in 1993.

Jack Wyatt is a character designed to give Ferrell room to do all of the things he does best: the goofy cheerleader jump, the audacious nakedness, the absurd attempts at melodrama—there's even a nod to his notorious impression of James Lipton. The role was reportedly intended for Jim Carrey, but Ferrell's shtick is as inspired as some of Steve Martin's classic performances. (As for that "audacious nakedness," Jack appears as a guest on a late-night talk show, and Isabel zaps him so his clothes disappear, leaving him leaping around in embarrassment. His vital parts are blurred out in the scene.)

In fact, Jack is unfortunately too crazy and erratic to be taken seriously as Isabel's romantic ideal—and that's the film's biggest problem. We sympathize with Isabel's yearning for a real relationship. (After her first real fight, she declares, "It was very hard , but secretly quite thrilling!") And thus, it's disappointing that the film doesn't find her a more promising match than this self-centered oaf. In a better movie, Isabel would have realized that she doesn't need to a man's adoration in order to be fulfilled. 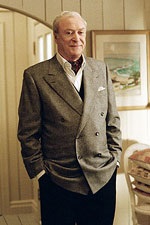 But alas, in that last act, it's suddenly obvious that the brains behind this brouhaha belong to the woman who wrote the cliché-ridden favorites Sleepless in Seattle and You've Got Mail. Spirited, anarchic comedy gives way to such familiar devices as the last-minute change of heart, the nicely packaged lessons (like learning to say "I'm sorry"), and the race to catch the girl before she leaves for good. In Ephron's world (she co-wrote this movie with her sister Delia), the only "happily ever after" vehicle is a two-seater.

Even the soundtrack turns obvious and unimaginative. The hit parade of witch-oriented pop songs culminates with the Police's "Every Little Thing She Does Is Magic." Frantic to inspire some kind of feeling in the audience, they even dust off R.E.M.'s emotional anthem "Everybody Hurts."

To make matters worse, Isabel and Jack are surrounded by forgettable characters, played by actors who deserve better. Jason Schwartzman and Kristin Chenoweth waste our time in half-cooked roles. (Interestingly, Chenoweth, playing a mortal here, once earned a Tony nomination as the Good Witch Glinda in a Broadway production of Wicked. A regular on TV's The West Wing, the versatile Chenoweth also recently released a Christian album, As I Am.) Shirley MacLaine's vainglorious Iris is a feeble echo of Dianne Wiest's Bullets Over Broadway diva. Poor Steve Carrell, who became Hollywood's hottest laugh-getter when he stole the show in Ferrell's Anchorman, looks desperate in a doomed last-act appearance.

Ferrell and Kidman deliver the necessary fireworks when the inevitable, climactic confrontation arrives, and Ferrell gets what will become the film's most quoted punchline. But afterward, all that's left to do is tie the loose ends into standard fairy-tale knots. Isabel's search for true love ends up looking like another rash Beverly Hills romance, ticking like a time bomb, and the movie becomes something as frivolous and disposable as, well, an episode of Bewitched.

Bewitched is rated PG-13, and families should brace themselves for some strong language, including sex and drug references, and partial nudity—a full frontal shot of Will Ferrell, with his vital parts blurred out. Those with concerns about portrayals of witchcraft should be aware that Bewitched only dabbles in fairy-tale-variety potions and a whimsical portrayal of tricks that end up backfiring on those who use them. It is in no way a glorification of real-world sorcery.

"Ephron's comedy … is more pleasantly amusing than outright hilarious," says Harry Forbes (Catholic News Service), "but unlike The Honeymooners, this one pays homage to its small-screen precursor in just the right way. The script could have been sharper, but there are positive messages about honesty and friendship."

It has "an inspired premise that puts other TV-to-film retreads to shame," says Jeffrey Huston (Crosswalk). But he arrives at a very different interpretation of the film. "Isabel's eventual 'coming out' plays similar to that of homosexuals. From Jack's over-reacting hysterics about what he may have 'contracted' to Isabel's declaration that she can't help it (she was 'born this way'), the third act of this Bewitched also plays as subtle pro-gay parable."

Frederica Matthewes-Green (National Review) says, "There's something magical about a really enjoyable and satisfying movie, but Bewitched is left holding the broom."

Tom Neven (Plugged In) writes, "Bewitched has the same light-hearted feel as You've Got Mail, Sleepless in Seattle and When Harry Met Sally. … It has the same inevitability, too. … The witchcraft in this movie, with two notable exceptions, has nothing to do with witchcraft and Wicca as practiced today."

Isabel's spells fail to work on most mainstream critics.

1 of 4
Nicole Kidman shows her comedic acting stripes as the witchy IsabelIsabel just wants to experience real love, like a mortal&mdash;and Jack (Will Ferrell) is her manShirley MacLaine stars as Iris (and Endora)Michael Caine is Isabel's father, Nigel, a suave spellcaster