The man known as the Father of Christian Rock, whose health has been failing in recent years, played his last U.S. concert Friday night in his hometown of Salem, Oregon.
David Sanford|June 27, 2005

SALEM, Oregon—In what he called his last U.S. concert, 58-year-old Larry Norman came out of retirement Friday at the historic Elsinore Theatre and wowed a sold-out audience that included fans from England, Scotland, Ireland, Germany, and Australia.

"As far as I can tell, this is the last time I'll be able to play in America," Norman, known as the Father of Christian Rock, told the crowd, an enthusiastic and eclectic mix of all ages and styles of appearance.

Since suffering head injuries in an airplane accident 27 years ago and severe heart problems 14 years ago, Norman has been unable to tour regularly. He officially retired in 2001, the same year he underwent quadruple bypass surgery and was inducted into the Gospel Music Hall of Fame.

Norman opened the show with a solo set, starting by singing, "I was born and raised an orphan / In a land that once was free," the first lines of "The Great American Novel" from Only Visiting This Planet, regarded as one of the top contemporary Christian music albums of all time.

When Norman appeared to forget the lyrics halfway through his first song, he made a joke, recovered well, then stumbled again. The third time, Norman asked his audience, "Does anyone know the last verse?" They knew it, gave him a few words, and he finished strong.

At the conclusion of the song, Norman gave his trademark "One Way" gesture, pointing an index finger toward heaven. People throughout the crowd joined him in the salute.

Norman began singing "Song for a Small Circle of Friends," stumbled, and started over with help from his fans.

Before beginning his third song, Norman joked, "I better slow this one down so we both know the words." He came through with strong performances of "Reader's Digest," "If God Is ... 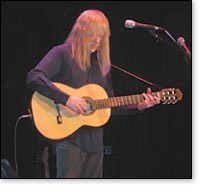