The clout of SNL alum Will Ferrell as a box office draw has only grown since 2003's family friendly Elf, followed by the PG-13 rated Anchorman in 2004. So despite the title, you won't have to drag kids (or adults) to Kicking & Screaming.

It also helps that the film subject is one of the most popular sports with children today. Yet despite coining the soccer mom demographic more than a decade ago, it's taken this long to create a definitive movie focused on the enormous popularity of youth soccer. And despite regular news stories about overzealous parents who become more emotionally invested in the game than their offspring, it's still a timely premise.

Set (but not filmed) in the Chicago suburbs, Ferrell plays Phil Weston, a mild-mannered vitamin salesman with his own health store. Despite a loving family and a successful business, we learn that he's never lived up to the expectations of his fanatically competitive father Buck (Robert Duvall), the owner of a popular sporting goods store and coach of the Gladiators, the local champion soccer team.

Because Buck is so focused on his team's success, Phil's 10-year-old son Sam (Dylan McLaughlin), a member of his grandpa's team, spends more time warming the bench than he does running on the field. In an underutilized gag, Buck's star player is his own boy Bucky (Josh Hutcherson), the product of his second marriage—and thus Phil's 10-year-old stepbrother. When Phil implores for his father to give Sam more game time, he learns that Buck has already transferred his grandson to the Tigers ("You traded my son?" "Well, I didn't actually get anything for him … ").

Unfortunately, the Tigers are in last place, due to questionable talent and a coach so dispassionate, he ditches ...

Join in on Facebook
Tags:
None
Posted:
May 13, 2005
More From: Russ Breimeier 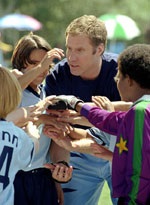