Christafari frontman Mark Mohr wants to use reggae to reach the world for Jesus—especially in the Caribbean, where the island music was born.
Andree Farias|October 3, 2005

When reggae music first hit it big in the '60s behind forerunners like Bob Marley, it remained controversial because of its common association with Rastafarianism and marijuana use. Decades later, it's a stigma that Mark Mohr, leader and founder of pioneering Christian reggae group Christafari, continues to battle. Interestingly, the opposition doesn't come from conservative Christian types. Rather, it's Caribbean believers who are giving him the hardest time. In this conversation with Christian Music Today, Mohr discusses this cultural dichotomy, along with the history of his band, his ministry vision, and the myth that all reggae musicians do backstage is smoke weed. 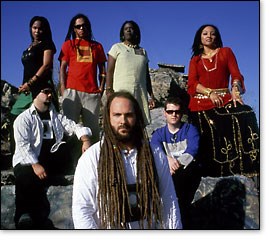 Mark Mohr (front and center) leads his eclectic reggae band Christafari to reach people in the Caribbean for Christ.

How did you first become interested in reggae music?

Mark Mohr When I was a kid, I was into every kind of music that you can imagine. But when I went to Jamaica as an early teen, that's when I was truly first introduced to reggae. I fell in love with it. Bob Marley's Legend was the first album I bought. At that time, I was as rebellious as one can be. I was involved in drugs. One of the things that really drew me to reggae was its association with marijuana and its attempts to justify it. [I was drawn to] its attempts to misquote Bible verses and take them out of context to prove that marijuana is OK, which it is not.

A few years later after I truly came to Christ and repented of my sins, I still had the love for the genre. I felt God impressing on my heart to start a reggae band that was based on the world, but to do it for him—in an effort to reach people that were susceptible to falling into the sin that I had fallen into, or that were already there. To become all things to all men.

Reggae isn't so popular. Was it tough to find bandmates who aligned with your vision?

Mohr Oh yeah. From the very beginning, I had to find people that knew little or nothing about reggae and train them. Then, as the years progressed, musicians were replaced by others who played reggae and had come out of the secular industry, come to Christ, and used their skills. Most of the people I'm working with now have been playing reggae or world music for most of their lives. When we first started, we were the only CD you could find in stores, but now there aren't that many CDs in stores, but there's hundreds and hundreds [of reggae CDs] available on the Internet. We're not the only ones doing it anymore.

Reggae music is a niche style, more so within Christian music. How have you managed to stay together so long?

Mohr The lineup of the band has evolved through the years, so it's not like Aerosmith, where it's the same five guys all the time. We're eight people. We're more like a missions team that has the same leaders, but it's evolved each year as time progresses. But the mission still stays the same. The leadership stays the same. It's tough to be a niche within a niche, to be on the outside fringe of both markets, because we don't really have a place.

The gospel market basically says, "That doesn't fit our format." And the general market doesn't really align with what we believe. But when we play for both, when people hear our music without the stigma attached to it—Christianity—they hear it. In the mainstream, they love it, they embrace it. They respect it, even if it's a secular festival. Our first tour was the Reggae Sumfest, which is the biggest secular reggae festival in the world. They can't get enough of it. The problem is the machine of the music industry. They manufacture things that they want everyone to like.

Do you think this aversion toward Christian reggae is due to the things it's commonly associated with, like Bob Marley, drug use and Rastafarianism?

Mohr Yeah, and you would think that if there's someone who would appreciate the music, it would be someone from Jamaica. But it's in Jamaica where we get the most judgment. Don't get me wrong. We've played in Jamaica many times to rave reviews, but there are always people standing there with their arms crossed, their hands on their hips, saying, "How could they be doing this for the Lord?" They're judging the outward appearance. You see a bunch of dreads [dreadlocks] on stage and people dancing around singing to some serious roots reggae, but they don't care what the lyrics say. They'd say, "Oh, I'm sure these guys are smoking weed backstage." But we're not! They have no idea that I'm an ordained pastor, that I went to Bible college. (See Mark's bio here.)

The backlash doesn't come from anywhere but the hyper-religious, the ones who won't let go of their tradition—the ones who want old-time religion. We may get a taste of that if we go to New York and there's a couple of old ladies at the show. But chances are [those people] are not going to be at our church anyway. But we really don't have that many issues.

Calypso, soca, and reggae are all rhythmic styles that originated in the Caribbean islands. Why doesn't the church embrace those styles?

Mohr The real issue is, the church is allergic to change. This isn't always the case, but if you look at the average churches in the Caribbean, they were planted by missionaries from America and from Europe, however many years ago. And basically, [the people there] have frozen that church since the period when it was planted. They don't want to adapt and grow as churches do here. And if they do, they just imitate what they see on TBN.

What do you mean?

Mohr Very hyper-charismatic. A lot of the things that are going on down there are only getting them from America. It would seem weird that the Caribbean churches are imitating America, and certain American churches are imitating the Caribbean. But that's how it is. It's even weirder when they don't accept their own music in worship, but would rather use something that they borrowed from a Kirk Franklin or a Mary Mary CD.

That reminds me of when drums were first introduced in American churches and the controversy that caused. So churches there don't worship to calypso?

Mohr Some churches do, and I love to see it. It is more and more gaining acceptance. But there are so many churches that don't use reggae, or calypso, or soca. A lot of that has to do with the baggage that they associate with the genre. Soca music in Trinidad is associated with carnivals—lewdness, promiscuity, different things. But you separate that baggage from it, and in places like Jamaica, they'll do worship over a soca beat all night long. But dancehall in Jamaica is connected with lewdness, so you won't hear them worshipping over a dancehall beat. It's cultural.

How about Rastafarians themselves? What do they think?

Mohr We definitely get a lot of judgment from devout Rastafarians. The loving ones are completely open-arms to us. But there are those from the fringe that find it very, very offensive that we are trying to share our message to them. It's because it implies we believe that they're lost, and because there are people out there who believe that it doesn't matter what you believe, that we're all going to heaven. But I don't believe that. I'm going to preach the gospel. I'm going to evangelize. And that's the clash that we'll get. The gospel is offensive. It's a stumbling block. First Corinthians says we're going to be called fools with a foolish message. But I'd rather be called that for my message and my music [knowing] that I'm aligned with the Word.

Your band is quite bold in its message. Is it OK if your music is never accepted at a universal level? And if it is, are you afraid it might get diluted?

Mohr I don't want to get diluted. At the same time, I feel that there's a way one can become mainstream without doing that. Christ did that with parables. The thing is, he always explained them to the people. There's a lot of people that are singing "parabolically," but they're not saying, "This means that," explaining the kingdom of heaven. Christ always had to clarify things. I'm all about being creative and writing songs that make people think, but at the same time we want to make [our message] clear.

So evangelism is Christafari's ultimate goal.

Mohr Hands down. Evangelism is the ultimate purpose. The secondary purpose is to edify the body of Christ.

Read more about Christafari at their official website, and check out Mohr's record company, Lion of Zion, featuring various artists making Caribbean music of all styles. Mohr's wife, Avion Blackman, is a member of Christafari and recently released a solo album, which you can read about here

Mark Mohr (front and center) leads his eclectic reggae band Christafari to reach people in the Caribbean for Christ.