The Weather Man is sort of a feel-good downer comedy, if there can be such a thing. Nicolas Cage plays David Spritz, a man who knows little about meteorology but is paid about a quarter-million dollars to spend a few hours each day at a local Chicago TV station, where he stands in front of a green screen and reads the weather reports off a teleprompter. You might think this would open up all sorts of opportunities for him, but nearly everything in his personal life has taken a turn for the worse. His wife has divorced him, his children have serious social and self-esteem problems, and his father—a prize-winning novelist whose cool, detached demeanor keep him emotionally separated from David—may be dying. What's more, total strangers bug David with questions about the weather or throw product placements—er, I mean, fast-food leftovers—at him, and all because he's a famous face who does very little work for big bucks. No wonder he feels so hollow. 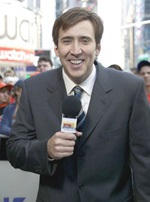 And yet the audience with whom I saw the film laughed quite consistently throughout. Cage can be such a quirky, odd duck that watching him try to make sense of normal family life has an inherently amusing quality. But some of the laughter may have been of the nervous or disbelieving kind. Early on, David's father Robert (Michael Caine) tells him that his overweight daughter Shelly (Gemmenne de la Peña) is mocked by her classmates—Robert calls them "her colleagues"—who call her "Camel Toe" because the pants she wears are awfully tight in a certain area. This term is repeated by various characters throughout the film, and just in case Robert's clinically accurate explanation of the term's meaning was not clear enough, we are shown a quick series of close-ups of examples.

If being repeatedly reminded of a girl's nether regions isn't creepy enough, it seems David's 15-year-old son Mike (About a Boy's Nicholas Hoult) may have even bigger problems looming on the horizon. Having been caught with marijuana, Mike now spends time with a counselor, Don (Gil Bellows), who seems just a little too eager to make an impression on him—buying him clothes, having him over for dinner, taking pictures, and so on. These scenes, too, elicited a fair bit of laughter, partly due to the obviousness with which Don seems to be pursuing his quarry, and partly due to his utter cluelessness as to how obvious he is. But just as this subplot seems to be building up to something, it fizzles out. There is some sort of incident, and there are conflicting accounts of this incident, and David hears about it after the fact; but whereas most films would use David's (and the audience's) reliance on second-hand information to sow some doubt and to build up to a much bigger revelation later on, this film merely brings that part of the story to a pat, tidy close. 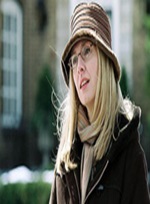 In yet another fatherly role, Michael Caine plays Dave's dad

Similarly, it is not at all clear why, in one early scene, we see Shelly sitting and smoking with a friend and cussing about some other girl. This is never followed up in any of the scenes that follow. When Shelly tells her father that she "knows" what her nickname means—"Camel toes are tough," she says—are we supposed to think, based on this scene, that she is worldlier and smarter than this, but she is protecting her father from knowing that she knows why the kids call her this? Or does this scene merely illustrate how lame her own life is? Either way, it feels like something got cut somewhere along the way here, too.

For the most part, there is an emotional ambivalence to this film that is reminiscent of the films of Alexander Payne. Just as we never quite know whether we're laughing with or at the characters in Sideways or About Schmidt, so too we never quite know if we're supposed to identify with the consistently depressed and melancholic characters who populate The Weather Man, or feel superior to them. And the fact that Hope Davis, the pushy, demanding daughter of About Schmidt (and the pushy, demanding sister in the recent Proof) plays Cage's pushy, demanding ex-wife certainly doesn't work against this impression. But writer Steve Conrad (Wrestling Ernest Hemingway) and director Gore Verbinski—who seems to be taking a break between Pirates of the Caribbean flicks to prove that he can do more grown-up movies, too—don't quite trust us to settle for this, so they fill the script with important life lessons and nudge the story toward an arbitrarily upbeat ending.

But there are some bright moments along the way. The film sometimes makes us privy to David's thoughts, and it is genuinely funny to see how utterly random thoughts can interfere with his efforts to focus on a single idea, or, alternatively, how his mind does stay focused on a single idea even after it has been interrupted by a bare-knuckle fight. David's dreams of a better life are visualized in a rather surreal way when a cartoon character comes from out of nowhere to loom outside his hotel window. The Hans Zimmer score (with additional music by James S. Levine) is a nicely low-key change of pace from some of his more recent, more bombastic efforts. And the cinematography, by Phedon Papamichael (whose credits include Sideways), is full of impressively chilly images of snow and rain and all things frozen, from the ice floes floating in the waters around Chicago to the layers of ice shattered by David's archery practice. It may look bleak, but there's still some beauty.

The Weather Man is rated R for strong language and sexual content. The characters use four-letter words fairly frequently, and there are a few graphic descriptions of sexual acts and body parts. A fair bit of dialogue also concerns the term "camel toe," a reference to the way tight clothing fits a female's private parts. A teenaged boy is befriended by a counselor who appears to be a pedophile. There is also a shot of a naked breast during one of David's one-night stands.

The preview for The Weather Man shows actor Nicolas Cage playing the title character, braving the elements with an umbrella in hand, and suffering a bombardment of projectiles from disrespectful citizens. It certainly looked like a zany comedy.

But critics inform us that Gore Verbinski's "comedy" is a dispiriting affair. As Cage's character suffers a midlife crisis, struggling to accept what his life has become, he begins to fight back in various and awkward ways, trying to find a new perspective. The results are less than profound, and most would rather see Verbinski's next film—the sequel to Pirates of the Caribbean, coming in July '06.

Chrisitan Hamaker (Crosswalk) writes, "The Weather Man … is one of the strangest Hollywood studio concoctions to be thrust upon the public in some time. The film boldly peels back the veneer of material success, showing the existential emptiness that affects so many today, but falters badly by embracing these trends and the fractured society they have helped produce."

Adam R. Holz (Plugged In) says, "The Weather Man might best be described as a tragedy fueled by heedless secularism … The movie does offer a redemptive message … But that positive theme is still quite shallow and hopeless as it's stripped of a faith-informed worldview … The other dose of rain and sleet in The Weather Man is how it is so thoroughly battered by a storm of profanity and graphic, demeaning representations of sex—both visually and in several sequences of shocking dialogue."

David DiCerto (Catholic News Service) says it "starts out as simply depressing, but spirals into something more thoroughly cheerless. The Weather Man aspires to the sort of angst-chic quirkiness of independent movies by filmmakers such as Charlie Kaufman, David O. Russell and Alexander Payne, but its arrow falls well short of the mark, like those of its sad-sack protagonist … With its excessive profanity, shapeless script and trite message that life, like the weather, is highly unpredictable, those little breaks of sunshine are hardly worth suffering through the film's overwhelming cloudiness."

Todd Patrick (Christian Spotlight) has a half-dozen ways to say how much he hates this movie. He calls it "R-rated trash. It is a depressing look at a dysfunctional man and the completely dysfunctional world around him. It's not funny … This is Hollywood entertainment at its worst. In my view, there is nothing redeeming about this movie at all. I urge Christians to keep their hearts and minds far from it."

Mainstream critics find this one to be a bit too chilly.

Gabe Spece (Relevant) writes, "Ultimately, The Weather Man is one of those movies that will divide crowds. Some will find the story of a man striving for something better to be invigorating. They'll say it's a movie bold enough to say that sometimes life sucks, and we have to pull from the wreckage something valuable. But others, maybe those who have seen the whole mid-life crisis scenario played out better in films like About a Boy and American Beauty, won't be so moved by a recycled character's fight for redemption."