"Betting on sports? Say it isn't so!" Such shock and outrage is the only reason I can think of for starting Two for the Money off with the dubious "inspired by a true story." The events are of little historical or cultural consequence, so perhaps it's intended to lend credence to an insider's look at the world of "sports consulting," directed by D.J. Caruso (2004's Taking Lives).

Matthew McConaughey stars as Brandon Lang, a college quarterback whose dreams of stardom are broken along with his leg on the football field. Years later, he's making a living in Vegas recording spots for 900 numbers. Turns out he also has a gift for predicting football games, and it isn't long before he attracts the attention of Walter Abrams (Al Pacino), the head of a sports consulting firm in New York City.

Wait, isn't betting on sports illegal? Absolutely—in 49 states including New York. Yet as Abrams points out, though the networks and the government both turn a blind eye, sports betting is still a $200 billion-a-year industry in America. What's key—and this is probably where the "true story" inspiration comes into play—is that organizations like the one run by Abrams don't place any bets. They're similar to stockbroker firms that offer free information; it's the clients who make the illegal bets. The motto around the office is, "I don't want your money, I want your bookie's money."

Clients who lose pay the firm nothing for bad information. But winners are expected to give a percentage of their winnings; the more they use the firm for information, the more they're expected to pay. In short, it amounts to the (technically) legal exploitation of gambling addicts, and success is based on the consultant's ability to "sell certainty to an uncertain world."

Hence why Lang's prognostication skills move him from an ugly, fluorescent-lit cubicle in Vegas to a swanky apartment and office in the Big Apple. Abrams grooms his new protégé for cable television, transforming him into "John Anthony, the Million Dollar Man," and it isn't long before Lang starts showing up the office competition, picking winners for 80-85% of the week's college and NFL football games. Ah, but what happens when the picks start to go wrong? The film goes to some lengths to show how unpredictable sports can be, and the effects of the bad bets on everyone involved.

McConaughey, who once played Dazed and Confused, does a fair job with naïve and cocky for what is essentially the Tom Cruise role in films like The Color of Money and Cocktail. But the character doesn't have enough dimension, and at times it's a little hard to believe someone who "believes in God" can turn into such a foolish, pompous jerk so quickly. Similarly, Rene Russo, in her first role since 2002's Big Trouble, doesn't do badly in the role of Abrams' wife Toni, but it's not much to work with for her comeback either. We want to sympathize with Toni as the only apparent voice of reason among the three main characters, but more often than not, she comes off as a dull nag. 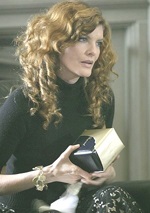 Rene Russo as Toni, Abrams' wife—and a voice of conscience

Meanwhile, Pacino is, well, Pacino. We've seen this same corrupt wheeling and dealing from him before as the lawyer in 1997's The Devil's Advocate and the CIA director in 2003's The Recruit, but I'd be lying if I said he wasn't fun to watch for most of the movie. As one would expect, his dialogue is extremely profane and crass, but in that uniquely over-the-top way that he's perfected over the last 15 years—the speech to a gambling support group about their need to lose is vintage Pacino. But he also puts some heart into the role of Abrams, a businessman who still loves his wife and daughter despite his flawed sense of ethics. Ironically, Pacino is the primary reason for seeing this movie, yet also the primary reason to warn sensitive viewers away from it.

Two for the Money starts off intriguingly with some sharp writing as we learn about the sports consulting biz, still unsure about where the story is headed, and enjoying characters that begin much happier than they end. But then the ball is fumbled after halftime, about the point where Lang is regarded as brilliant for delivering an honest but terribly lame and boring plea on the television broadcast for people to call him for his picks. Not long after that—out of sheer stupidity, a god complex, or probably both—Lang becomes so overconfident in his abilities, he allows an office rookie to pick the winning team for the week's most important game. That's amazingly not the beginning of his bad picks, but it is the point when it becomes hard to sympathize with or root for our "hero," because he deserves his fall from grace.

Things unravel from there as plot points are developed but never concluded. A vaguely romantic subplot between Lang and a girl he meets in a restaurant contributes the film's sex scene, and is completely unnecessary to the overall story. Lang eventually consults a Puerto Rican crime lord (Armand Assante), who later threatens his life and his family's when the picks go bad—yet it never comes up again, physically or verbally. We later find Abrams faking his heart condition to fool Lang, but his reasons for doing so remain unclear. The film wants to be one of those "nothing is what it seems" con games like The Sting, except it never goes anywhere, drawing out to an unsatisfying finale that tries to simultaneously condemn and condone gambling while attempting to reconcile characters we stopped caring about an hour before.

At best, Two for the Money is an ethical parable about the perils of gambling, portraying an incremental descent into sin caused by exploiting the weaknesses of others. But the film is ultimately a vulgar and muddled mess of story ideas from other movies—essentially the story of Wall Street with the setting of Any Given Sunday. (Coincidentally, Oliver Stone directed both, and Pacino starred in the latter.) Like Gordon Gecko's famed "Greed is good" speech from Wall Street, Abrams smugly declares, "Everything's about money," and it's good advice in this case. While there are parts of Two for the Money worth watching, it's ultimately not one worth putting your money on.

Two for the Money is rated R primarily for its pervasive bad language, which includes taking the Lord's name in vain and rampant use of the f-word. There's also a scene of sexuality thrown in with silhouetted nudity. The film's violence either refers to the nasty looking football injury at the film's start or an attack later in the film—neither is bloody or graphic, but the latter involves one guy urinating on another.

Al Pacino seems capable of two performances. Some are complex, subtle, and engaging (The Merchant of Venice, Insomnia, The Insider, The Godfather II). Some are over-the-top, dominating, and involve a lot of shouting (The Devil's Advocate, Scent of a Woman, Any Given Sunday.)

Two for the Moneyss, starring Pacino, Matthew MacConaughey, and Rene Russo, falls in the latter category. But according to many critics, Pacino's "scene-chewing" performance may be the best thing in the film.

David DiCerto (Catholic News Service) writes, "McConaughey's cockiness and Pacino's histrionics aside, the real problem with the testosterone-juiced movie is that it lacks a likable character … or a strong script. Smart money will go elsewhere."

Adam R. Holz (Plugged In) says, "From a content-oriented perspective, the spread on Two for the Money is far too wide. But it's too bad the filmmakers decided to go to such extremes, because they've done a forceful job (in other ways) of showing the injurious power of addiction. Al Pacino's performance is riveting—and horrifying as you slowly realize just how damaged his character truly is. His insatiable longing for something to fill his emptiness brings him—and those close to him—to the brink of destruction."

Mainstream critics urge viewers to save their money.