Say what you will about Mel Gibson, but there's no denying the man knows how to use a camera—which is more than can be said for many other actors who have turned to directing. His skills as an auteur have become especially apparent over the course of his last two films, The Passion of The Christ and now Apocalypto, both of which feature mostly unknown actors speaking ancient languages; the absence of big stars and readily intelligible dialogue keeps us focused on the visuals, which are bold and unsettling throughout. Gibson also made both films with his own money, so for better or for worse, they truly represent his personal artistic vision, unlike many so-called "independent" films that are tweaked by their distributors. But that means Gibson's weaknesses are just as evident in these films as his strengths.

Apocalypto begins with a shot that brilliantly distills the essence of the movie, as the camera slowly moves in on some bright green forest plants, and a pair of feet suddenly rush past in the foreground. This is a chase movie with an environmental theme, and the footsteps that momentarily block our view of the foliage bring to mind the opening shot of the similarly-titled Apocalypse Now, in which helicopters whirred by in front of us just before laying waste to the jungles of Vietnam.

But it turns out the main chase has not yet begun; the feet that rush by are actually those of a Mayan forest-dweller who, together with other men from his tribe, is hunting a tapir (an animal related to the horse and the rhinoceros). The method by which they catch the animal is ingenious but also rather crudely violent; and as soon as they sit down to cut out its organs, the script turns crude in other ways, too. It seems one of the ... 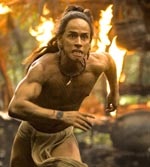