The makers of End of the Spear didn't find out about co-star Chad Allen's homosexuality until after they offered him the job, and then they felt obliged to honor the contract.
Mark Moring |January 26, 2006

End of the Spear, the new feature film telling the story of the five Christian missionaries who were martyred in 1956 in the jungles of Ecuador, features an openly gay man in one of the lead roles.

Chad Allen, who plays Nate Saint (one of the martyred missionaries) and the grown-up Steve Saint (Nate's son), is an outspoken homosexual actor who has lobbied for gay rights and gay marriage.

"We found out Chad was gay after we offered him the parts," said executive producer Mart Green of Every Tribe Entertainment, the production company behind the movie. "We felt like when we offered him the contract, we were obligated to honor it."

Green said that learning of Allen's homosexuality presented the Every Tribe team with "an obvious dilemma," but that after discussing it with director Jim Hanon, writer/producer Bill Ewing, and Steve Saint, who served as a consultant for the film that tells his father's story, all agreed they should keep their word and honor the contract that had been offered.

In an e-mail to Christianity Today Movies, Saint said, "I could not imagine how something like this could slip through a professional screening process." He continued, "After I got over the emotional shock of realizing that a man who has chosen to live a lifestyle in stark contrast to my dad's would actually be playing his role in End of the Spear, I realized I would likely be held responsible for that decision. ... 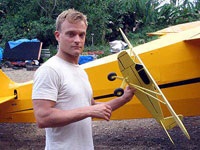