It's all in the eyes.

That's one of the lessons in The New World, an epic story of love and change, from the celebrated writer/director Terrence Malick. As the Europeans arrive on North American shores in 1607, we watch history unfold through the eyes of two characters on opposite sides of a cultural divide: John Smith (Colin Farrell) and Pocahontas (Q'Orianka Kilcher).

The New World is an extravagant achievement in historical recreation. It's also the most refined example of Malick's visual poetry, which he developed through Badlands, Days of Heaven and The Thin Red Line. He has a meditative style all his own that will aggravate many viewers who prefer straightforward narrative and conventional Hollywood flourishes. He's not an entertainer so much as he is a poet who uses pictures instead of words. Creation itself pours forth speech, as the psalmist says, and Malick invites those with eyes to see to look closer and listen carefully.

At times, the imagery captured by Emmanuel Lubezki's camera feels like a dream: a line of birds unfurling from the forest like a whip, a lightning blast whiting out the wilderness, and—Malick's favorite spectacle—wind in the grass.

But we're given more than the wonders, joys, and horrors that Smith and Pocahontas witness. Malick lets us eavesdrop on their private thoughts, the way we listened to the philosophical soldiers of The Thin Red Line. Their inner monologues distill their experiences into primal questions: What compels men to control or destroy what they don't understand? Where does the conscience come from? What does love require of us?

If eyes are windows to the soul, John Smith's soul is deeply troubled. He's a haunted, damaged, guarded man. When he's released from imprisonment ... 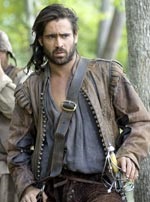