Sometimes, a title that looks pretty simple can, on closer inspection, turn out to be pretty complex, because it lends itself to more than one possible meaning. Does The New World refer to John Smith's discovery of America, or to Pocahontas' discovery of Europe? Does L'Enfant refer to the baby that is sold on the black market, or to the immature guy who put him there? Such titles work because each layer of interpretation has a strong basis in the movie itself. Sometimes, however, a title that may have more than one meaning doesn't work on any of its possible levels. And such, it seems, is the case with The King.

The title may be a reference to Elvis Presley, since the story concerns a recently discharged naval officer named Elvis Valderez (Gael García Bernal)—but the film rarely, if ever, actually mentions the musician. Or it may be a reference to Jesus, since Elvis goes looking for the father he never knew as soon as he leaves the Navy, and he quickly discovers that his father, David Sandlow (William Hurt), is now a born-again Christian and a successful pastor with a family—but again, the film doesn't make much, if any, use of "kingdom" language, nor does it focus on Christ as "king of kings" or anything like that.

Gael Garcia Bernal as Elvis Valdarez, just out of the Navy

Or it may be a reference to how Elvis sees his father, or even himself. Elvis is the son of a prostitute that David once knew, long before David became a Christian, and David, embarrassed that his sinful past has come back to haunt him, turns Elvis away at first. So Elvis, who begins his post-Navy life with a run-down car and a dingy motel room, sets out to worm his way into the family's comfortable middle-class life. Perhaps he sees himself as one who ascends a throne, conquers a dynasty, or proves himself superior to others.

At any rate, the cryptic ambiguity of the film's title is a clue to the cryptic ambiguity of the movie as a whole. Some critics see in it a smug attack on Bible-belt Christianity; others have praised the actors for creating complex characters who tug at our sympathies even as they act in alarming or repugnant ways. And through it all, there is Elvis, a figure who has no buddy, no sidekick, and thus no one to whom he can explain himself for our benefit. Instead, we watch as he manipulates individual members of David's family, never sure if he is doing so according to any sort of plan, or if one darn thing just leads to another.

William Hurt plays a born-again preacher with a sinful past

David and certain members of his family do, at times, seem like evangelical stereotypes, quick to judge others and so keen to act on their own religious agenda that they don't quite function like regular members of society. When Elvis shows up outside the house, David tells his family to avoid that man, though he does not tell anyone how he knows him—except his wife, who retreats to the bathroom, angrily. When a car salesman asks David for a credit card, David first slips him a card with the word "JESUS" printed on it in huge letters. David's son Paul (Paul Dano) is a marginalized high-school senior who leads the worship band and actively campaigns to have Intelligent Design taught in school—and when he is offered a beer, he does not graciously decline the offer, but instead says, "I don't drink."

The main exception to all of this is David's daughter Malerie (Pell James), who—completely unaware that Elvis is her half-brother—begins to date him behind their father's back. Is this an act of revenge on Elvis's part, or is it a sign of his own mental instability? It's hard to tell, and after a while you begin to think the filmmakers themselves weren't really sure. They certainly didn't give much thought to Malerie's side of the relationship; the way she acts, you'd never guess that she came from a family of Bible-thumpers. Does she sleep with Elvis as an act of spiritual rebellion? It doesn't quite seem like it; she seems to be in love. A teenaged preacher's kid might feel a few moral pangs about such things, but if Malerie does, she never expresses them. And when Elvis lets her in on a shocking secret—though, oddly enough, not the fact that their relationship is incestuous—she takes it very calmly. 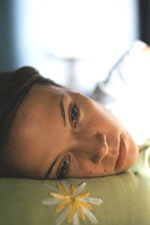 Pell James as Malerie, the preacher's daughter who falls for Elvis

By this point, if not well before, you begin to realize that none of these characters are real people. When one of them commits a sudden, unexpected act of violence that seems to come from out of nowhere, it feels less like a natural expression of that character and more like a plot twist imposed on the script so that the writers can take the story to its next scandalous level. What's more, when this person commits certain violent acts, it seems to be because this person is trying to hide something—and yet, after the final fatal cover-up, the first thing this person does is run to someone and, we assume, spill the beans.

The King is directed by James Marsh, a documentarian making his first narrative film, and it has a low-key naturalism that belies the sheer melodrama of the script. The script was co-written by Marsh and Milo Addica, and it bears some striking similarities to Addica's previous screenplays. Like Birth, which starred Cameron Bright as a ten-year-old boy who claims to be the reincarnation of Nicole Kidman's dead husband, The King is about a family whose routine is interrupted by a stranger who asserts a connection with the family's past. And like Monster's Ball, which starred Halle Berry as the widow of a death-row inmate who hooks up with a former prison guard, The King partly concerns a female protagonist who has lost someone close to her, and who does not realize that her new lover—the person filling the void in her life—is in some way responsible for creating that void in the first place.

But The King is ultimately not as interesting or accomplished as those other films. And while I would like to say that it provides a complex, many-shades-of-grey look at the nature of repentance or the consequences of sin, the film's shallowness in certain crucial areas makes it difficult to be so positive. I'm all in favor of warts-and-all depictions of Christians, and generous viewers might be willing to give the most positive spin possible to David's actions (even though his actions often betray a deep insensitivity to the needs of his family). But the closer you look, the more you realize that warts are all this film has to offer.

The King is rated R for strong sexual activity involving a teen (including some upper nudity), some violence (including stabbing, smothering, arson, and deer hunting) and language.

In The King, a Navy officer named Elvis is discharged, goes home to Corpus Christi, Texas, and seeks out his estranged father. He's not quite prepared for what he finds there. His father (William Hurt) is now a Baptist preacher who isn't interested in letting his parishioners know the truth about his past and his forgotten son. To make matters worse, Elvis is immediately attracted to his father's beautiful daughter—and before long, Elvis is shaking, rattling, and rolling the family's picture-perfect lives.

Yes, once again Christians are portrayed on the big screen as especially rotten individuals.

1 of 3
Gael Garcia Bernal as Elvis Valdarez, just out of the NavyWilliam Hurt plays a born-again preacher with a sinful pastPell James as Malerie, the preacher's daughter who falls for Elvis