Is Harold Crick living in a comedy, or a tragedy? That's the question Harold himself tries to answer in Stranger Than Fiction, a story about a man who hears a voice narrating his everyday activities and making ominous predictions about his future, as though he were a character in a novel and the voice were its author.

It is also the question that many moviegoers may ask when they sit down to watch Stranger Than Fiction. The film stars Will Ferrell, the Saturday Night Live alumnus who is best known for playing outrageously cartoonish characters like Ron Burgundy and Ricky Bobby—but it never feels like a Will Ferrell comedy. True, it is kind of quirky, but it is also rather sad and melancholic. Like Adam Sandler in Punch-Drunk Love, Ferrell is playing a character who resembles some of his other roles, but he reins in any urge he might have had to ham things up; instead, he puts his skills to the service of an ambitious story told by a filmmaker who truly knows his craft.

So, to the story. Harold Crick is an IRS agent whose life is little more than a string of dull, dreary, methodical routines. Every morning he brushes his teeth a certain number of times, and he walks a certain number of steps across the street to catch his bus—and the film annotates his activities with pop-up diagrams that track his every move. Harold's activities are described to us by a female voice-over narrator—and then, one morning, Harold hears the voice for himself. At first this is merely annoying, and it drives Harold nuts—but then the woman's voice makes a cryptic reference to Harold's imminent death, and Harold begins to fear for his life.

The voice belongs to Kay Eiffel (Emma Thompson), a novelist who has a bad case of writer's ... 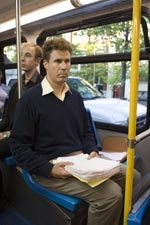