The Heartland Film Festival celebrates movies that inspire—and Hollywood is catching the vision. Meet this year's award winners, and the man who launched it all.
By Mark Moring|October 20, 2006

For the 17th straight year, a film festival in Indianapolis is recognizing the finest in independent filmmaking, lauding movies that, according to its mission statement, "artistically express hope and respect for the positive values of life."

Founded in 1992 by Jeffrey Sparks and a few movie-loving friends from college, the Heartland Film Festival has grown from a small-time event to one of the most revered festivals in the industry. In recent years, the festival—and the organization behind it—has caught the eye of major Hollywood studios, who covet Heartland's stamp of approval on their big-release movies.

A few of those studio reps were in attendance at Saturday night's Crystal Heart Awards Gala, an Oscar-like ceremony that lauds the little guy, giving major cash awards to independent filmmakers who create movies that stir the soul.

Ralph Winter, a producer (the X-Men and Fantastic Four films) for 20th Century Fox, has long been a supporter of Heartland. Having recently wrapped filming in Australia on X-Men Origins: Wolverine (due in May 2009), Winter took time from his busy schedule to hang out in Indy for a few days to give a seminar, encourage young filmmakers, and to present some awards at Saturday's banquet.

Saturday's biggest winner was Captain Abu Raed, which took the $100,000 Grand Prize Award for Best Dramatic Feature. The film, directed by Jordanian immigrant Amin Matalqa, earlier this year won the Audience Award at Sundance. Jordan's entry into the Oscars, Abu Raed is about an airport janitor whom local kids think is an airline pilot; he gives them hope and inspiration by telling them fantastic stories.

Pray the Devil Back to Hell won the $25,000 Award for Best Documentary Feature. The movie depicts Liberian ... 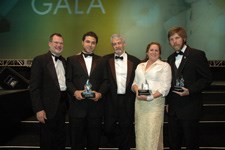