At a time when Christian filmmakers are eager to prove that they can make movies that are just as generic and formulaic as anything Hollywood puts out—Christian political thrillers, Christian serial-killer mysteries, Christian romantic comedies, and the like—there is something to be said for a movie like The Last Sin Eater, which doesn't even try to follow any secular trends. The FoxFaith film, which concerns an obscure quasi-religious ritual that was practiced by some Britons and emigrants from Britain as recently as the 19th century, also puts spiritual concerns front-and-center, instead of trying to smuggle them in through the back door.

So if the characters get a little preachy at times, as people in Christian movies are wont to do … well, at least it fits this story in a more organic sort of way.

The film takes place in the Appalachian mountains circa 1850, and the title refers to a custom that the characters have brought with them from their native Wales, in which a man—usually a beggar or some similar social outcast—supposedly takes the sins of the newly deceased upon himself in exchange for food and drink. Because sin eaters are thought to have the sins of many people weighing on their souls, they are shunned by their communities, except when someone dies and their services are required—and even then, to look a sin eater in the eye is to invite a curse.

Of course, if you tell someone not to do something, the odds are pretty good that he or she might do it—especially if that person is a child. And so it is that a young girl named Cadi Forbes (Liana Liberato) attends the funeral of her grandmother and looks a particular Sin Eater (Peter Wingfield) right in the eye, while all her friends and relatives are making a point of looking the other way or closing their eyes altogether.

Cadi becomes obsessed with the Sin Eater, and not simply because she is curious to know who he is, where he lives, how he got his peculiar job, or why that blonde woman down the road goes looking for him up the mountain every now and then. Cadi's younger sister died recently, and Cadi feels that the death is somehow her fault; what's more, she believes her mother (Elizabeth Lackey) would have preferred it if Cadi had been the one that died, instead. So, traumatized by the harm that she thinks she has caused, Cadi wants to ask the Sin Eater to take her sins away.

Henry Thomas (right) is the Man of God

You can sense where this is going, right?

Cadi's quest to be cleansed of her sins is helped along by a couple of … well, let's call them visitors. Early on, Cadi walks onto a tree bridge high above a river and contemplates jumping to her death, but—shades of It's a Wonderful Life!—she is interrupted by a mysterious, angelic girl named Lilybet (Thea Rose). Soon after this, Cadi meets an anonymous preacher (E.T.'s Henry Thomas) who spells out the gospel message, letting her know that Jesus is the only "sin eater" she will ever need.

Cadi accepts the preacher's message immediately—she "feels" different after saying the sinner's prayer (or the 19th-century equivalent) in a way that she never felt during her dealings with the Sin Eater—and the question that hangs over the rest of the film is whether the rest of the community will come to accept that message, too. Along the way, Cadi learns about the deep dark secrets that compelled her kin to adopt the custom of having a sin eater in the first place.

The very concept of "sin eating" is so unusual that the film cannot help but be at least a little interesting. However, the movie suffers from the same sense of inevitability that afflicts so many other Christian films; at times you suspect the filmmakers are not all that interested in the phenomenon of "sin eating" for its own sake, but regard it as just another set-up for an evangelistic punch line. 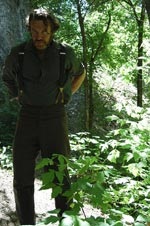 The set-up is made to seem even more trivial near the end, when a handful of flashbacks reveal the reason why this community has a "sin eater" in the first place. Instead of exploring the psychological, social or spiritual factors that would sustain such a practice, the film settles for a couple of pat explanations that sound like something ripped out of a historical romance novel. What's more, the original sins committed by this community are so extreme, the average moviegoer might not relate to them, and thus to the community's deep desire for absolution.

The film is based on a novel by Francine Rivers, and directed by Michael Landon Jr. from a script he wrote with Touched by an Angel producer Brian Bird. All of Landon's previous directorial efforts have been adaptations of Janette Oke novels (the Love Comes Softly series) or tributes to his father, the Little House on the Prairie star; and The Last Sin Eater would be quite at home sitting next to those stories on someone's DVD shelf. In some ways, it even brings to mind the famous Little House episode in which Laura blames herself for the death of her baby brother, runs away from home, and meets an angel.

The Last Sin Eater might also amuse fans of Star Trek: Deep Space Nine, because it features Louise Fletcher (an Oscar winner for One Flew over the Cuckoo's Nest) as an old friend of Cadi's grandmother; Fletcher played a "Bajoran" called "the Kai" on Star Trek, and here, she plays an elderly member of the community who butts heads with a villain named "Brogan Kai," whose father she often refers to simply as "the Kai."

The film suffers from pedestrian direction, but it benefits from decent performances, especially where its young star Liberato is concerned. As a window into an older culture, or an evening's entertainment with the family, you could certainly do worse. Just don't be surprised when the movie starts preaching to the converted—that is, to the fellow believers who will undoubtedly make up the bulk of its audience.

The Last Sin Eater is rated PG-13 for thematic elements (including an openly Christian message, and a discussion of the magical or superstitious practice of "sin eating"), and some intense sequences of violence (a man dies after being beaten up, a girl falls to her death, a tribe of Native Americans is slaughtered by settlers).

More and more movies made by Christians, about Christians, and marketed to Christians are opening in theaters every month. Most of them are shrugged off by critics—including members of the religious press—as mediocre (or worse) in their craftsmanship, and as preachy in their storytelling.

Only a handful of recent such films—like The Second Chance—combine excellent craftsmanship with inspiring portrayals of Christian faith. They have impressed viewers with content and with form, showing more than telling, exploring rather than proselytizing.

It begs the question: Are Christian moviemakers taking the best path by sending message-driven movies out to theaters in second-rate packages? Doesn't excellence—or the lack of it—send a message of its own?

The latest of these films, The Last Sin Eater, is earning some praise for its lead actress, 11-year-old Liana Liberato. But is it a step in the right direction for Christian filmmaking?

That depends on which critic you ask. Christian film reviewers are divided over this adaptation of Francine Rivers' novel, which was directed by Michael Landon Jr.

Under a title calling the film "mediocre," Annabelle Robertson (Crosswalk) says she's "uncomfortable" criticizing a fellow Christian's art, but affirms that we must hold each other to high standards. To that end, she observes that Landon is "a bit heavy-handed with his gospel presentation . . . leaving little to the imagination. As a result, non-Christian viewers will probably not enjoy the film."

She adds that there are problems with the production values, the "didactic" dialogue, the pacing, the editing, the "stale" cinematography, the "off-kilter" sound, and more.

But she concludes that "Christian audiences looking for solid teaching about the faith will appreciate this very much, along with the beautiful Utah scenery."

Bob Hoose and Steven Isaac (Plugged In) praise Liberato, and applaud the film for "telling a story about how Christ's redemptive work can set free even the most guilt-beset heart." But they add that "[M]any of Liberato's adult co-stars fail to live up to her potential. And chunks of the script feel as if the writer was working around commercial breaks, not directly addressing more savvy theatergoers whose expectations are rising right along with ticket prices."

Harry Forbes (Catholic News Service) is fairly complimentary, saying it's "rather short on period atmosphere, but consistently holds your interest despite plot improbabilities, and registers as good family fare for all but the very youngest viewers. … There are fine Christian messages, in an evangelical vein, about redemption, reconciliation and renewal."

But most mainstream film critics find it to be an elaborate advertisement for Jesus instead of a memorable work of art.

In The New York Times, Matt Zoller Seitz finds a few positive things to say, but concludes that it's "a blunt and rather prosaic Christian allegory … a big-screen Sunday school story with sumptuous scenery, graceful crane shots and Rembrandt lighting — designed mainly to impart and then repeat wisdom about guilt, sin and redemption …."

And Jeff Shannon (Seattle Times) stands out as one of the film's few defenders in the mainstream press, saying, "[I]t's plagued by a modest budget, resulting in the generic production values of a well-meaning TV movie. … While that may strike some moviegoers as a reason to stay home, this earnest adaptation … is easily recommended for what it gets right, and what it gets wrong is easily forgiven."