Several recent films take a life-affirming view of unwanted pregnancies, as babies are carried to term and abortion is dismissed as an option. Could this be a trend?
by Brett McCracken|July 17, 2007

Is 2007 the year the abortion debate goes Hollywood? In addition to several fiction films which address the polarizing topic, this year will also see at least two feature length documentaries on the debate: Unborn in the U.S.A. (in very limited release; it comes to DVD in October) and this fall's much-anticipated Lake of Fire (director Tony Kaye's first film since American History X). So what's with the sudden cinematic interest in this hot-button issue?

The subject of abortion—long taboo but occasionally approached in cinema (see The Cider House Rules or Vera Drake)—is arguably the most divisive topic in American civic discourse. As such, it is rare that a Hollywood film is brave enough to confront the matter, and even films that do approach it (such as Alexander Payne's 1996 satire Citizen Ruth) usually refuse to take definitive sides. Of course, there have been films with decidedly pro-choice perspectives (HBO's If These Walls Could Talk comes to mind), but can you recall any mainstream Hollywood films that are explicitly pro-life?

Though they likely wouldn't call themselves "pro-life" (in the politicized sense of the phrase), several recent films contain messages—both implicit and explicit—that herald the virtues and sanctity of giving birth to new life. Four such films are Children of Men, Waitress, Knocked Up, and the forthcoming Bella (to be released this fall).

Children of Men ushered in 2007 with a stark, dystopian vision of a future world mired in terrorism, racism, and existential despair caused by the universal inability to procreate. The film is about the struggle to protect one woman, Kee (Claire-Hope Ashitey), who, against all odds, is pregnant. Husbandless, penniless, and by all accounts ... 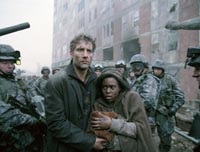