From the opening credits of Rescue Dawn—a mesmerizing overture of haunting music and archival footage of napalm bombing—one can sense that this is not going to be a traditional war film. Anyone familiar with legendary writer/director Werner Herzog (Grizzly Man) will also know as much. But even as this film is being proclaimed as Herzog's "most mainstream" and "most accessible" film yet (which it probably is), there are still some serious layers of beauty and depth here that go beyond most any film you'll see this year.

In some ways, Rescue Dawn is less an action/adventure war film than it is a deeply complex character portrait of Dieter Dengler, the curious German-American pilot who was the first—and only—American POW to successfully escape from a Laotian prison camp during the Vietnam conflict. The film follows Dengler (Christian Bale) as he crashes his plane into the menacing, Vietcong-occupied jungles of Laos during a classified mission in 1966. He is soon captured by enemy troops, tortured, and held in captivity in a remote prison camp, where he joins several other American and Thai POWs. As the prisoners become aware of their captors' intentions to eventually kill them, they plan a desperate escape. The second half of the film is the harrowing account of Dengler and his cohorts as they flee the enemy on foot in search of rescue, facing the ruthless brutality of both nature and man along the way.

The reason Dawn feels more like a character study of Dengler than it does a white-knuckle adventure story (which it is) is likely due to Bale's remarkable performance. Sporting an accent that is as complex as his character (a German-born, American-bred Wally Cleaver of sorts), Bale resists pinning down ... 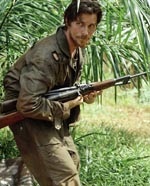