If you want to inspire a challenging discussion about art and culture, try this: Watch Martin Scorsese's excellent 2006 documentary No Direction Home: Bob Dylan, and discuss it. Then, reconvene a week later for a viewing of Todd Haynes' surreal new movie I'm Not There. Their differing, complimentary portraits of Bob Dylan will give you so much material to ponder and discuss, you won't know where to begin.

To study Dylan's career is to ponder provocative questions about poetry, politics, music, politics, celebrity, spirituality, and American history. It is beyond dispute that he's an artist of skill, imagination, and vision. But he is also as human as the rest of us, a man whose missteps have been almost as spectacular as his successes.

A dictionary full of words have fallen short of describing him. He's been a rebel, a prophet, a poet … even "Judas." He's almost too big for a movie. But Haynes' film emphasizes the fact that Dylan escapes all attempts to define and explain him. Taking up a few (but only a few) strands of Dylan's career, Haynes braids them together. It's a complicated weave of periods, styles, and facets of Dylan's personality.

Experiencing Haynes' ambitious vision is a little like trying to tour the Grand Canyon in two hours. The movie's whirlwind of information and ideas is both exhilarating and ultimately exhausting. Still, how often do we have this problem—a movie that gives us too much of a good thing?

Haynes tracks Dylan's emergence as a freewheelin' folk-singer fond of Woody Guthrie; his rise as a political poet of the '60s; the troubles of his personal life; his flight from exploitation; all the way to recent years, where he's become something of a recluse and a wanderer, traveling through ... 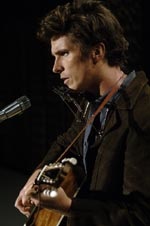