The TV and movie personality takes on Darwinism and evolution in a new documentary about Intelligent Design—and academic freedom.
by Peter T. Chattaway |April 15, 2008

Ben Stein got his start as a lawyer and a speechwriter for Presidents Nixon and Ford, and in more recent years he has written books, offered investment advice, and hosted both a game show (Win Ben Stein's Money) and a reality TV show (America's Most Smartest Model). But he is probably still best known for playing the boring high-school economics teacher who took attendance in Ferris Bueller's Day Off.

Now Stein is tackling education of a different kind, as the star of Expelled: No Intelligence Allowed, a documentary about the Intelligent Design movement—and the academic establishment's efforts to stifle the debate over the limitations of evolutionary theory that many ID advocates have been calling for.

The film opens in limited release this Friday.

How did you get involved in this movie?

Ben Stein: Walt Ruloff [co-writer and co-producer of the film] contacted me and showed me a bunch of very interesting slides and moving pictures about the cell. We talked a lot about the historical effects of Darwinism and social Darwinism, and he asked me if I would like to host a discussion about where Darwinism had gaps and where there were some unanswered questions about evolution. He said I could have a little bit of input into the storyline. I told him I was especially horrified by what Darwinism's social and historical impact had been on Jews, and that that would motivate me to try to get some involvement in the project.

How familiar were you with the subject of Intelligent Design prior to this?

Did you do a lot of reading to prep for the role?

Stein: Some. I read one book cover to cover, From Darwin to Hitler, and that was a very interesting book—one of these rare books I wish had been even longer. It's about how Darwin's theory—supposedly concocted by this mild-mannered saintly man, with a flowing white beard like Santa Claus—led to the murder of millions of innocent people.

Inevitably, this subject gets into the overlap between science and religion. Do you have any sort of religious inclination yourself?

Stein: I'm Jewish, and I have always believed that there is a God who was the prime mover in the universe, so it's not hard for me to think of him as the Intelligent Designer. 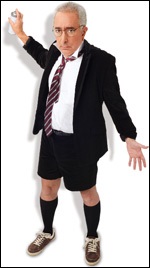 Stein says his research has bolstered his faith

Has your research into the intelligent design debate affected your beliefs?

Stein: Yes, it has made my belief in that much stronger. It has pointed out something which haunted me ever since I learned about Darwinism, which is, Where did it all start? How did life start? Darwinism has nothing to say about that—nothing useful, anyway—but I think Intelligent Design has a great deal to say about it.

[ID advocate] Phillip Johnson has said that as a scientific theory, Intelligent Design doesn't necessarily lead to God. It could lead to an alien, or something like that?

Stein: That's not my view. Because if there are people from another planet, where did they come from?

Right. My understanding is that ID advocates have tried to remain officially agnostic on that sort of question -?

Stein: Well, they can be as officially agnostic as they want. I think the Designer is God.

Your film is very up front about the God aspect.?

Stein: I think that's perfectly sensible, because I feel very strongly that there is a God and he's the guy who did it.

Do you feel that by putting God so front-and-center, you are blowing the ID scientists' cover?

And it doesn't scare me at all when scientists say, "Oh, but that can't be proved," because neither can any of the Darwinian hypotheses about how life began be proved. Anyway, I couldn't give a [profanity] whether a person calls himself a scientist. It doesn't earn any extra respect from me, because it's not as if science has covered itself with glory, morally, in my time. Scientists were the people in Germany telling Hitler that it was a good idea to kill all the Jews. Scientists were telling Stalin it was a good idea to wipe out the middle-class peasants. Scientists were telling Mao Tse-Tung it was fine to kill 50 million people in order to further the revolution.

What if someone said evolution is true and it doesn't matter how it has been used?

As for me, I'm choosing a theory [ID] that seems to fit the evidence, as well as my intuitive feeling of awe in the face of God. If Darwinists can present me with evidence about how the world began and how the cell got so complex, I'll be glad to re-examine my beliefs.

Some people—including some Christians who accept Darwinian science—say that ID is just a new version of the "God of the gaps" theory?

Stein: You can call God the "God of the gaps," but if the God of the gaps is the God who created the heavens and the earth, and created all the living things within that, then that's an awfully big God.