From The Diary of Anne Frank and Sophie's Choice to Schindler's List and The Pianist, there have literally been hundreds of films depicting the Jewish Holocaust. Most depict the Jews as helpless victims, unable to defend themselves from horrifying adversity and oppression. But sometimes they fought back.

Such is the case in Defiance, based on the book of the same name by Nechama Tec. The film focuses on the story of the Bielski partisans in Eastern Europe. Many irregular military groups formed in opposition to Nazi occupation, using guerrilla tactics to stay alive and hamper German operations. Most of these partisans involved local fighters from around Russia and Yugoslavia—loosely formed, but experienced soldiers nonetheless. The Bielski partisans were comparatively untrained civilians, based in what is now Belarus (between Poland and Russia), yet they still grew into the largest group of Jewish partisans during the Second World War.

The film begins in 1941 with the aftermath of the raid on the Bielski family farm; thankfully, the audience is spared this monstrous act of violence. Watching from the nearby woods until the Nazis leave, Brothers Zus (Liev Schreiber) and Asael (Jamie Bell) quickly recover whatever they can—including their youngest brother Aron (George MacKay), also in hiding—before burying their family and retreating back into the forest. They're soon reunited with their eldest brother Tuvia (Daniel Craig), who has returned home to check up on the family.

It isn't long before the Bielski brothers discuss (and exact) revenge on those responsible for murdering their family … but what then? Where can they go as the persecution spreads? As they continue to make camp in the woods and raid local farms for food and supplies, they encounter other displaced Jews, reluctantly welcoming them into their fold, uncertain whether they can accept responsibility for their safety and well-being. Before long, their camp evolves into a community, and word spreads throughout the region that there's a place for the Jews to seek refuge.

Some of the early ads and press materials position Defiance as a revenge story, suggesting a violent movie about Jews exacting revenge on their persecutors. There are some shootings early on, and a couple of battles later in the film evoke the war-time intensity of Saving Private Ryan. But this is not a graphic portrayal of the Holocaust like Schindler's List with a nonstop parade of torture and execution; much of the violence is surprisingly bloodless.

Defiance is more a remarkable tale of survival and compassion than it is a story of bloodshed. One can't help think of Robin Hood in the way the Bielski partisans raid the surrounding area while hiding in the forest, and their plight echoes pivotal tales of Jewish history—from Moses leading the squabbling Israelites in the wilderness to the Maccabees fighting for their liberation. I was even reminded of Richard Adams' modern classic Watership Down in the film's exploration of social interaction and empowerment among the refugees.

Because Defiance is primarily about the camp's struggle to survive, there's no specific adversary. For sure, the Nazi threat is always present, but much of the film focuses on the Bielski partisans battling cold, starvation, and illness during a bitter winter not unlike the American revolutionary troops at Valley Forge. They also face adversity from within as fear and uncertainty threaten to overcome them, leading to unrest and sedition.

In this way, the Bielski story is one about community. With strength in numbers and their collective skills, the Jews must learn that they need each other if they're to survive on their own in the wilderness. As Tuvia puts it, their goal is not to exact vengeance on their Nazi persecutors—"Our revenge is to live." 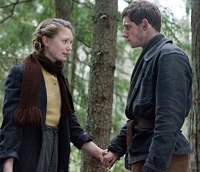 Central to the story are the Bielski brothers, their responses to adversity shaped by their contrasting personalities. Because he's only a boy, Aron is understandably shocked into silence. In his late teens or early twenties, Asael is the most visibly shaken by all that happens. The two elder brothers show more resolve in their actions, yet find themselves at odds with each other. Zus comes across as more vengeful and calculating, while Tuvia seems more stoic and compassionate. Naturally, this leads to some divisions within the community as well as the family, but it's interesting to watch these brothers develop and discover what choices they make. Not everything plays out as expected, and that makes for compelling storytelling.

The performances are strong throughout, particularly Craig and Schreiber. But hats off to the cast as a whole, as well as director Edward Zwick (Blood Diamond, The Last Samurai, Glory) and his screenplay's co-writer Clayton Frohman. They manage to establish many characters within the Bielski community using minimal details. It's no easy task to make the audience care about the supporting roles when oftentimes we don't even remember their names, but they're given just enough personality and distinguishing characteristics to make them memorable.

There's also a good ebb and flow to the storytelling in Defiance. It's not constant peril and tension. There's action and drama throughout, but the story maintains a good balance. 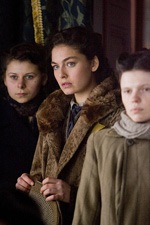 The only significant shortcoming is Zwick's directing style, or lack thereof. This is a good movie, very capably made, but there's something a bit generic about the overall filmmaking. Whereas Schindler's List and The Pianist reflected the work of Steven Spielberg and Roman Polanski, Defiance lacks vision—any number of Hollywood directors could have made this film (and there are too many scenes that are too reminiscent of other movies). Such an extraordinary story deserves extraordinary treatment.

What elevates Defiance is the inspiring story itself and the great ethical questions it raises. There are scenes where the Jews seem to enjoy killing the Nazis, as an act of revenge and catharsis. Consider the dilemma faced by the Bielski partisans when they capture a German solider. Do you hold him prisoner, kill him, or release him? There seems to be no single "right" answer, and the Jews struggle to hold onto their humanity when making these hard decisions. "We must not become like them," warns one of the Bielskis; another responds, "Yes, but at least we can kill like them."

If vengeance is the Lord's, then are the Bielski partisans really doing God's will? Are they merely doing what they must to survive, or do they go too far? Defiance successfully raises these questions without providing easy answers, because there are none. For better or worse, all they could do is respond how they thought best at the time, making their story a parable that resonates deeply with our convictions and choices, even today. As Tuvia put it, "Every day your freedom is like an act of faith."

Defiance is not quite the movie it could have been, yet it still remains a compelling tale that not only depicts how a community came together to face adversity, but also how they responded to it.

Defiance is rated R for violence and language. Though the film centers on the atrocities and horror surrounding the Jewish Holocaust and the early stages of World War II, it doesn't dwell on violence. With a few small edits, Defiance might have gotten away with a PG-13 rating as Hotel Rwanda did. Though sometimes intense, particularly with some shootings early in the film and a battle sequence toward the end, there's surprisingly little blood, and the violence is ultimately not as graphic a depiction of the Holocaust as Schindler's List or The Pianist. But take the R rating seriously, both for the subject matter and the profanity, which includes some f-bombs.

1 of 4
Daniel Craig as Tuvia BielskiTuvia and his brother Zus (Liev Schreiber)Mia Wasikowska as Chaya, Jamie Bell as AssaelAlexa Davalos as Lilka