In Bruges is a hard movie to describe. Written and directed by Martin McDonagh, Bruges might be called a neo-noir crime comedy, or a postmodern Shakespearean tragedy, or even a medieval morality tale. It looks and feels like a lot of things, but at the end of the day Bruges is about crime, punishment, and spiritual descent.

Colin Farrell and Brendan Gleeson are Ray and Ken—an unlikely pair of Irish hitmen sent by their boss Harry (Ralph Fiennes) to hide out in Bruges (pronounced "brooze"), Belgium. They are working-class mobsters: principled yet bumbling, efficient yet emotional. And Harry is their Tony Soprano. In Bruges, Ray and Ken are in a state of limbo; their instructions are to wait for further instructions from Harry. While they wait, Ray and Ken pose as tourists: staying at a homey guest house in the old town, taking canal rides through the city, visiting museums and cathedrals, etc.

What might be an otherwise pleasant vacation in an idyllic Flemish town (supposedly the most well-preserved medieval city in Belgium), however, is tainted by the psychological baggage that accompanies the criminal pair. Ray and Ken have just completed a particularly bloody job in London in which the target (a priest) was killed, along with an innocent praying child who caught a stray bullet. Triggerman Ray is paralyzed by guilt from his incidental child homicide, however, and Bruges is the last place he wants to be as he suffers under a dark conscience.

To get Ray's mind on other things, the kind-hearted Ken (the more cultured and professional of the two) insists that Ray accompanies him to the various historical and cultural attractions of Bruges. Here we get our own tour of the beautiful European city, following our protagonists into sites like the Groeninge art museum, the Basilica of the Holy Blood, and the 250-foot Bell Tower (which plays an important role in the film's climax).

The first three quarters of the film embody the feeling that Bruges is meant to represent: Purgatory. It's a place where sinners are stuck in unresolved spiritual disequilibrium—somewhere between eternal guilt (hell) and undeserved redemption (heaven). Indeed, the subject of Purgatory comes up in conversation between Ray and Ken (as they look on macabre Bosch paintings in a medieval museum), and there is a sense that both men recognize that Bruges is, unfortunately, their last stop (and last chance) on the road toward either redemption or reckoning.

Ray faces this fact with despair and self-destructive behavior. Colin Farrell impressively captures a soul in utter torment that is desperately searching for last-gasp moments of happiness. He meets a charming woman named Chloë (Clémence Poésy) who might be his only hope. But Chloë has her own toxic issues, and it soon becomes clear that if Ray is to be saved he will have to save himself. Meanwhile Ray befriends a dwarf American actor (Jordan Prentice) in town filming a European art film. Add some drugs, alcohol, Dutch prostitutes and a suicide attempt, and the bloke's road to recovery seems ever more unlikely. 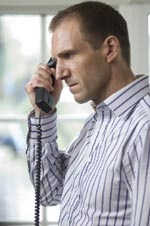 Ken, on the other hand, faces his demons with something that looks like penitence (or perhaps hardened world-weariness). "I have to reconcile myself to the fact that I've killed people," he tells Ray matter-of-factly, displaying an emotionless confidence that masks a much more complex man of love, flawed principles and sacrifice. The underrated Brendan Gleeson shines in the role—as the loving "big brother" to Farrell's fragile, needy Ray. The two of them share a great chemistry and unstated intimacy, perhaps best expressed in a lovely musical moment—to the Irish folk tune, "On Raglan Road."

As the third main character, Harry, Ralph Fiennes acts his disturbingly soulless best. When he arrives in Bruges to usher in the bloody final act, the tenor of the film completely changes. In the final minutes of Bruges we break out of Purgatory and enter a do-or-die existential reckoning, ending with deaths and sadness and irony and—if only in faint sketches—a little bit of hope.

Stylistically, In Bruges embodies a lively juxtaposition between stately gothic and imposing medieval structures and thoroughly chaotic, ever-moving photography. Featuring schizophrenic mobile camerawork and long, meandering takes, Bruges keeps us unsettled and attentive to the action on screen. In one brilliantly shot sequence, we watch Ken on the phone with Harry for what is probably a five-minute real-time take. The camera never cuts to Harry's end (though we hear his voice), but stays unswervingly on Ken's face—save for a passing nod to the television in Ken's room, which is showing the opening long-take scene from Orson Welles' noir classic, Touch of Evil. It's just one of the clever in-textual references that shows up in the busy landscape of this film.

Indeed, the eclectic pastiche motif of Bruges is at once its most interesting and confounding attribute. The "working-class Irish mobsters in medieval Belgium" irony aside, Bruges revels in the sort of quirky unpredictability that has come to define the Tarantino-age indie crime film (random acts of violence, excessively banal dialogue, hip music). Unfortunately for Bruges, many of its oddball idiosyncrasies feel clichéd and derivative. The whole subplot with the dwarf and film-within-a-film feels totally unnecessary, even when the dwarf proves crucial to the climactic moment of irony. And as fun as the array of supporting actors and serendipitous plot twists might be, they tend to overwhelm what is the film's best asset: its played-down character moments and psychological drama.

In the end, In Bruges falls short of what it might be. With the beautiful location asset of Bruges, a trio of great actors, and an Academy Award-winning director (for Six Shooter), Bruges should really be more complete than it is. There are several standout moments in the film, but as a whole it feels rather flat and arrested. For a film about Purgatory, however, that might be appropriate.

In Bruges is rated R for language and graphic bloody violence—for adult audiences only. In addition to pervasive use of the f-word and other offensive language, there are several scenes of gruesome violence. Some of the most disturbing images include the shooting (in the head) of a young boy and the suicide-by-jumping of one of the main characters (you see his twisted, bloody body after the impact on the street below). There is also quite a bit of drug use and some scenes with prostitutes (though no nudity).