Ostensibly, Bigger, Stronger, Faster is a documentary about one of the hottest topics in American culture today: steroids. But it is also a portrait of a family—the all-American Bell family from Poughkeepsie, New York. The Bells are made up of two parents (Sheldon and Rosemary, married for 37 years) and their three muscle-bound boys: Mike ("Mad Dog"), Chris (who wrote and directed the film), and the youngest, Mark ("Smelly"). 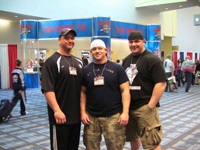 The Bell boys came of age in the Reagan-era 80s, at the end of the Cold War and the beginning of the physical fitness craze. Their heroes were people like Hulk Hogan, Sylvester Stallone, and Arnold Schwarzenegger, musclemen wrestlers and action stars who embodied the pumped-up male body image. Young boys everywhere sought to achieve the powerful physiques of these icons, and the Bell boys were no exception. They began intense weight training and undertook intensive dietary changes so as to look like Arnold and excel in sports like football, wrestling, and weightlifting. Only later did they find out that these so-called "heroes" conveniently withheld one crucial little secret to their physical success: steroids and performance-enhancing drugs.

These days, the Bell boys are all grown up, some married and with kids. Two of the three brothers (Mike and Mark) are regular users of steroids, justifying them for competitive powerlifting (Mark) and pro wrestling aspirations (Mike). Chris, who narrates the film, is the only brother who isn't on the juice, and you can see it in his slightly more normal-looking physique. The motivating question, then, that apparently led Chris (who also went to USC film school) to make this documentary is thus: "If steroids are demonized in society and considered un-American, what does that make my family? Are the Bell brothers the bad guys?" 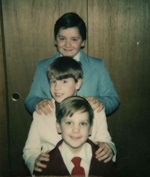 The Bell boys when they were younger

To its credit (and perhaps its detriment), Bigger does not approach the issue of steroids in a simplistic manner. That is, it refuses to write steroids off as a bad thing, but neither does it totally justify their use. Clearly Chris abstains from using steroids for a reason (though it is never really articulated), but he also makes some pretty compelling arguments as to why steroids should not be illegal. For example, he brings in numerous doctors and experts who downplay the harmful effects of steroid use and highlight the positive effects steroids have been proven to have in, for example, people with HIV.

In one of the strongest sections of the film, Chris points out the curiously vague criteria for what constitutes "performance-enhancing" drugs in the sports world. Why does Floyd Landis get in trouble for (supposedly) using steroids, but is not punished for using a homemade altitude chamber to train his body for high-altitude competition? Doesn't that also enhance his performance? And why is it that Tiger Woods' Lasik eye surgery (which increased his vision to 20/15 and no doubt made him a better golfer) is not considered "performance-enhancing"? Beyond sports, what about students who use Adderall and Ritalin as "study drugs" or musicians who use beta blockers to reduce performance anxiety? Is this cheating? In a world where any part or function of the human body can be enhanced or improved through surgery or medicine, where do we draw the line for what constitutes "cheating"? Indeed, we are now at a point where "gene doping" is the next frontier: for example, creating "double muscle" through genetic manipulation. Is it really practical to expect any sort of "natural" athlete to exist in the future?

Christopher Bell in an ad, before and after steroids

As interesting as these questions are, it doesn't change the fact that steroids and other doping drugs are illegal now. It is a moral issue to continue to abuse these drugs when they are explicitly against the rules. The film does a good job of pointing out the moral ambivalence of several of the main characters as they attempt to justify their use of steroids. Most egregious is Mark Bell, who says, "You can justify anything to yourself, and for me [using steroids] is okay. A lot of people lie to get ahead. It's just what you do." Mark, who coaches a high school football team, lies to his players who ask him if he's ever used steroids, emphasizing to the boys that they don't need them to be great players. It's infuriating to watch such two-faced disingenuousness, though the argument of the film is that this is just a byproduct of our "do whatever you need to do to get ahead" culture.

Though it is compelling and entertaining to watch (fashioned after the pop-documentaries of Michael Moore), Bigger has its faults. One of its main weaknesses is that it tries to cover too much ground and never really feels totally coherent or focused. It at times feels expository (a recounting of the history and controversy of steroids, from Ben Johnson to Barry Bonds), and at other times it becomes a more investigative, Frontline-esque exposé (as in the extended section on the corrupt, $24 billion dietary supplement industry). It also attempts to tie the whole doping issue to the broader American identity: the sort of "win at all costs" mentality. In fact, the subtitle of the film is "The Side Effects of Being American," which indicates that American-ness will be explored as a primary subject matter in the film. But this is not the case, and only in a few spots (and especially in the last few minutes) does the film directly address American culture as a unique contributing factor to our obsession with bigger, stronger, and faster bodies.

The film fares a little better in its pondering of human nature, framing man as inherently prone to cheating and chronically unsatisfied with everything. These instincts are exacerbated in a society in which cheaters seem to prosper and the media sanctifies the "perfect body" as the ultimate (and achievable) goal. To counter these influences, the Bell family matriarch, Rosemary, an active churchgoer, does her best to remind her boys that they are "fearfully and wonderfully made" (Psalm 139:14) and that "you are exactly as God made you to be." Indeed, it is a shame that Rosemary and her voice of reason doesn't get more screen time, but her lack of influence represents the uphill battle a parent has in today's over-mediated, hyper-imagistic culture.

Ultimately, Bigger, Stronger, Faster presents a foreboding look at our collective conception of the human being: as a machine-like mechanism that can be sculpted, doped, enhanced, and perfected because, well, because we all want to be powerful and attractive and in control of our image. Distant is the notion that our bodies are "temples" or "not our own," or anything even remotely sacred. Instead we subject ourselves to unnatural drugs, diets, and training regimes, because many of us can relate to Mike "Mad Dog" Bell when he says, "I'd rather be dead than average."

Bigger, Stronger, Faster is rated PG-13 for thematic material involving drugs, language, some sexual content and violent images. The film contains some disturbing images (particularly of some truly grotesque steroid-enhanced bodies), but on the whole it is relatively inoffensive and clean. Parents who want to foster a discussion with their children (particularly young boys) about issues of body image and competition might find this a useful film. On the other hand, some parents might be wary of the film's reluctance to completely denounce steroids or performance-enhancing drugs.