Nineteen years later after Indiana Jones rode into the sunset, there's still magic in that hat.

The greatest gift that Indiana Jones and the Kingdom of the Crystal Skull gives to audiences is Indy himself. Fans can stop fretting. He's back.

Dispelling all fears about age and ability, Harrison Ford puts on that legendary fedora and becomes Henry Jones Jr. exactly as we remember him. That smoldering glower. The snappy wisecracks. Those gutsy stunts. The capacity to survive punches that would knock out a prizefighter. That familiar enthusiasm for riddles, buried treasure, and dead languages. It's all here. There's never been a better actor/character match than Ford as Jones, and he seems giddy as a schoolboy to be cracking that bullwhip again.

In fact, all through this, the fourth Jones film, there's a sense that the whole Indiana Jones team is bursting with enthusiasm at the chance to ride with Jones again. That probably accounts for the film's strengths and, alas, its considerable problems. Their enthusiasm gets the better of them. 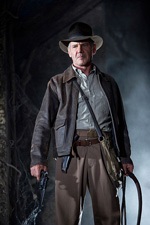 Harrison Ford is back as Indiana Jones

Back in 1981, the storytellers of Raiders of the Lost Ark took Indy's world somewhat seriously, making outlandish adventures seem almost convincing. But these days, while the James Bond series is leaving behind campy cartoon action for a dustier, grittier "realism," Indy is speeding in the opposite direction, headlong into Looney Toons absurdity. Crystal Skull makes all previous Jones adventures seem modest—even plausible—by comparison.

After we watch a man walk away from an atomic blast with barely a scratch in the opening act, what could possibly inspire a sense of suspense or dread? And we still have to suspend our disbelief while a motorcycle speeds through a crowded university library; a hero swings on jungle vines fast enough to chase down speeding trucks; an army of angry monkeys attacks the Communists; an ocean of deadly insects discerns good guys from bad guys; and Indy takes a waterfall plunge that makes Ford's famous Fugitive stunt look easy. Viewers will either mock the excess, or surrender like a wide-eyed eight-year-old to these tidal waves of cliffhanger nostalgia.

Story credit for this episode goes to series originator George Lucas and co-writer Jeff Nathanson, but there were five different scripts written for this movie, and screenwriter David Koepp (Jurassic Park) clearly stitched together ideas from many disparate sources. It's a bumpy ride.

So what is the story?

The first half of the film—the better half—sets the stage. We join Jones in mid-adventure. This is the 1950s, and some things have changed: Indy's become fond of the phrase "I like Ike!" But some things have stayed the same: He'll fight the Cold War the old fashioned way—with his whip and his pistol in hand.

Indy's been kidnapped by a troop of Russian spies, led by an ice-cold officer from the Ukraine. Irina Spalko (Cate Blanchett) looks like a female Terminator, and she has an unnerving habit of flexing her gloved hands like a surgeon about to do some invasive work. Spalko's a decorated Soviet agent, she explains, "because I know things. I know them before anyone else. And what I do not know, I find out." Blanchett relishes this, the most cartoonish role of her career.

Driven by that thirst for knowledge, Spalko uses Indy's know-how to find some buried treasure in a warehouse full of government secrets. She wants the "mummified remains" from the wreckage of those famous UFO crash sites in Roswell, New Mexico. She believes those bones will give her access to tremendous psychic power that will help the Reds win the Cold War.

In an acrobatic escape from a very big bang, Indy proves he's still got the moves. But when he gets back to the comforts of his classroom at Marshall University, we learn that the years have cost him plenty after all.

"We've reached the age when life stops giving us things and starts taking them away," says Indy's friend Charles Stanforth (Jim Broadbent). Stanforth, the new dean of students, is referring to his predecessor, the late Marcus Brody, and other kindred spirits that he and Jones have lost. And there's plenty more to lose: McCarthyism is at its peak, and our hero has been targeted as a suspect "of great interest" for allegedly aiding KGB agents on American soil. Stanforth instructs Jones to take a leave of absence. Hat in hand, Indy walks away to measure his options.

Before he can go looking for a new job in Leipzig, he's interrupted by a young punk who looks like Marlon Brando in The Wild One. Mutt Williams (Shia LaBeouf) is a Harley-riding, tough-talking kid with a Jones-like jones for adventure. His action figure accessories? A comb and a switchblade.

Fans complained when LaBeouf appeared in this film's previews, but they should drop their protests. He lives up to the challenge, and would be an asset to any future episode.

After the film's best chase scene—a high-speed pursuit around (and through!) the university campus—Mutt informs Indy that a colleague, Harold Oxley (John Hurt), has been kidnapped while seeking the legendary Crystal Skull of Akator in Peru.

And we're off on an airplane that trails a bright red line across the map, straight to South America, where Indy hopes to bring Oxley some help. He gets more than he bargained for, and we get exactly what we paid ten bucks to see: ancient tombs, obstacle courses rigged with booby traps, and savage, blowgun wielding natives. (It's enough to make one miss Satipo and Belloq.)

As they dig deep, they explore questions surrounding the mysteries of the crystal skulls. Do the skulls exist? Do they belong to the gods of ancient cultures, or to "saucer men from Mars"? Are they powerful? What would happen if they were all brought back to their place of origin?

Mutt gets spooked by Indy's stories about the Mayans who distorted the shape of their childrens' skulls to resemble the elongated craniums of their gods. "No," Mutt objects. "God's head is not like that." Indy smiles. "Depends on who your god is." 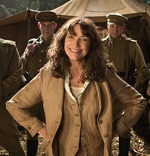 And yet, Indy never bothers to ask for help from the God who has saved him so many times before—especially in Raiders and The Last Crusade. He seems to have cast aside all lessons learned from the Almighty. Perhaps that's why he and Mutt end up captured by the Communists, hostages in good company. Very good company, in fact: A standing ovation, please, for Marion Ravenwood, the greatest leading lady an action hero ever kissed. Karen Allen's return as Marion is a short-lived delight, and her sharp exchanges with Ford are the stuff that moviegoer dreams are made of.

But there's precious little time for dialogue or character development. We still have to make room for an encounter with a snake, a barrel of monkeys, the most outrageous truck chase of the series, and—of course—grisly comeuppances. (Be warned: If you don't like bugs, you're going to have nightmares.)

In the last act, the world goes to pieces in scenes of unprecedented devastation. Indy's just a bystander while loose plot threads and nagging questions are buried in the rubble. (What happened to the FBI's suspicion that Jones was a Communist? How could Indy have survived "twenty or thirty" top-secret missions with Mac, the sidekick played by Ray Winstone, who seems like a fickle buffoon? Why would the government keep a warehouse full of secrets next to a nuclear testing site?)

In Raiders and Last Crusade, climaxes carried some measure of mystery. The skulls, unlike the Ark of the Covenant and the Holy Grail, don't enrich the story with meaning. Sure, we learn where they come from, and who they belong to. But their various powers are baffling—not only do they have hypnotic, telepathic power, but they also serve as a great deterrent against jungle predators. And in the end, they teach the same lesson that Raiders taught: when knowledge is pursued at all costs, it leads to destruction.

And that destruction stirs up so much sound and fury that one of Indy's most powerful collaborators—composer John Williams—is prevented from enjoying any time in the spotlight. Remember the scene in the Map Room in Raiders? Indy spoke not a word while Williams' music soared, evoking a sense of wonder that this film desperately needs.

Still, for all of the cacophonous spectacle and nonsense, Crystal Skull is a blast of old-fashioned matinee fun. While it doesn't hold a candle to that first and greatest chapter, thank goodness it resembles Last Crusade more than the gruesome, wearying Temple of Doom.

And there's comfort to be found in the film's conclusions. Spielberg is not the action-adventure director he once was, but he has matured in his convictions. He once celebrated individualistic dreamers, men and boys who abandoned their families for adventure. More recently, he's been guiding his adventurers home, teaching them to shoulder their responsibility and discover the rewards of relationship.

After so many years of recklessness, perhaps that aging archaeologist will find some room for family and fidelity under that old fedora. His treasure "belongs in a museum." But his heart deserves more.

Crystal Skull is rated PG-13 for adventure violence and scary images. The violence resembles previous Indy films, and this one is populated with ghoulish mummies. There's even an atomic blast. But there's very little blood, unless you count the squashed insects. The action is more cartoonish then ever. Mutt Jones shouts a crass expletive or two. And you'll catch references to Indy's numerous flings and affairs.