Christine Collins (Angelina Jolie) is a single mother—competent, responsible, and devoted to her nine-year-old son Walter—who works as a switchboard supervisor in Los Angeles. She returns home from a weekend shift in early 1928 to discover that Walter has vanished. A nationwide search is launched, but to no avail, until a child claiming to be Walter Collins surfaces in Illinois six months later. He is returned to Christine, who immediately recognizes that the boy is not her son. Broken-hearted, confused, and manipulated by a shifty police force unwilling to recognize its mistake in front of the press, she allows herself to be persuaded to take the boy home on a "trial basis."

Becoming increasingly certain that the police have simply made a mistake, Christine protests and persists in requesting that they re-open her case and continue to search for Walter. But the Los Angeles Police Department of the time—embattled, inept, rotting from the inside out—recognizes that she represents a potential public relations nightmare for them, and goes to great lengths to paint Christine as a bad, irresponsible, and mentally disturbed woman. She fights back with the help of Reverend Gustav Briegleb (John Malkovich), who has made it his mission to expose what he calls from the pulpit "the most violent, corrupt, and incompetent police department this side of the Rockies." But in this society, women who stand up against corrupt authority were not smiled upon, and things get much worse for Christine before they get better.

Meanwhile, a detective on a simple deportation case stumbles across a teenager who tells a sickening tale with potentially explosive implications, and as the case unfolds, the city is rocked to its core. ...

Join in on Facebook
Tags:
None
Posted:
October 24, 2008
More From: Alissa Wilkinson 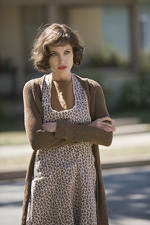