As a video game, Max Payne was fairly groundbreaking for its time, offering a cool, but gritty crime noir about a New York City cop driven to the edge by the murder of his family. It played like a graphic novel heavily influenced by action movie clichés, particularly John Woo films and The Matrix with its nifty ability to slow down time, leaping with guns blazing while dodging the enemy's bullets. Yet as stylish and fun as the storytelling and game-play were, with a tongue-in-cheek name like Max Payne, the game was clearly an homage to action classics rather than a serious story.

As a movie, the game is gone, and with it, surprisingly, most of the action. What does that leave? A clichéd cop action movie based on a game about cop action movie clichés. And with virtually no action for the first hour of the film, it's a tediously paced action film at that.

In a world where visuals rule and moviemaking budgets are tight, director John Moore (responsible for the slightly less atrocious Behind Enemy Lines and pointless remakes of The Omen and Flight of the Phoenix) and the filmmakers apparently felt that the movie could get by on the "strength" of its dramatic storytelling. They were wrong … dead wrong. (Cue dramatic music.)

Payne is played by Mark Wahlberg, whose career has taken a serious nosedive between this and M. Night Shymalan's recent bomb, The Happening. But aside from accepting the role in the first place, I can't fault him or any of the other actors—well, except perhaps the laughably awful performance from Beau Bridges. And considering that "Marky Mark," Ludacris, and Nelly Furtado are all in this cast, I wonder if Max Payne might have worked better as a musical. It ultimately doesn't matter ...

Join in on Facebook
Tags:
None
Posted:
October 17, 2008
More From: Russ Breimeier 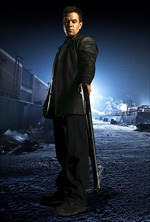