Two women. Fifty-three years in time and an ocean apart. Both recently relocated for their husband's jobs. Both looking for their own role in this new location. Both feeling rather lost.

And both finding their way in the kitchen.

One of them is quite well known—Julia Child (Meryl Streep)—though we're introduced to her before she's made a name for herself. It's 1949 and her husband, Paul (Stanley Tucci), has just been assigned to the American embassy in Paris. The couple pulls up to the lovely flat that's to be their home for the next four years and Julia's beside herself. All this and a country full of amazing food to boot. The giggly, airy-voiced foodie is in heaven.

The other woman, Julie Powell (Amy Adams), is experiencing her own version of hell. It's 2002 in Queens and she and her husband, Eric (Chris Messina), have just moved into a 900-square-foot walk-up apartment above a pizza parlor. It's cramped and her kitchen is tiny. This is especially problematic since Julie's only escape from her dismal job—answering angry and distraught phone calls for the Lower Manhattan Development Corporation on the heels of the 9/11 attacks—is the certainty of a well-crafted recipe. Nearly every day she returns home in tears and seeks solace in Julia Child's Mastering the Art of French Cooking.

But back in 1949, Julia has yet to help pen this cookbook classic. And she's begun to grow restless. What to do with herself in France besides eat? She tries a hat-making class, and bridge lessons, and finally lands at Le Cordon Bleu, where she makes her way to an advanced class full of very serious men. Not wanting to be the "silly woman" in the class, she practices her chopping and roasting at home and soon is the star pupil. ... 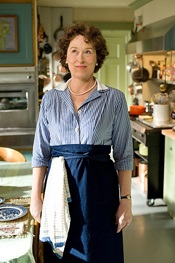