All the elements are present for a lovely love story—great actors, sumptuous scenery, an intriguing story line. Unfortunately these elements are a bit too jumbled in time.
Camerin Courtney|August 17, 2009
Our Rating

I've never had much of a desire to travel through time. Let's just let the past, with all its mistakes and bad haircuts, stay in the past, I've always thought. Until now. As the ending credits of The Time Traveler's Wife were rolling, I had a sudden urge to slip back a year or so to tell the film's screenwriter and director that the fruit of their labor was going to frustrate audiences nationwide if they didn't add a few more scenes early on.

Instead The Time Traveler's Wife starts with a car driving through a snowy, sleepy little town. There's a mom in the front seat and what appears to be a girl in the backseat, until the mom calls the child Henry (see what I mean about those haircuts?). They're singing Christmas songs together until their sedan looks like it's going to smash head-on into a semi. But before it does, the boy slowly disappears.

We next see him a few yards and a few moments away, shaken and a bit scratched up, but fine. The car wreckage, which presumably still contains his mom, is smoking in the background. He's talking to a man who tells him he's a future version of himself and that everything's going to be okay.

Then the grown-up Henry (Eric Bana) dissolves and reappears—naked—in the back stacks of a large Chicago library. There's a pile of clothing nearby, which he quickly puts on before going back to his post at the desk to deliver a book to a patron.

His next customer is a young woman, Clare (Rachel McAdams), who recognizes him instantly, even though she's a stranger to him. Clare convinces Henry to have dinner with her that night, where she tells him, "Your future is my past. For you, none of it has happened yet. But for me … I've known you since I was six." 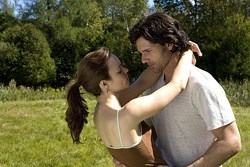