The live-action/animation follow-up to the 2007 hit doesn’t bother much with plot and characterization, but squeaks by successfully on gags and chipmunk charm.
Carolyn ArendsDecember 23, 2009
Our Rating

Ever since Alvin and his brothers debuted in 1958, movie, TV, and music producers have been able to count on the money-making combination of precocious animated rodents, kid-friendly plot lines and, most importantly, chart-topping pop music delivered in those trademark chipmunk vocals. The latest installment in the adventure is Alvin and the Chipmunks: The Squeakquel, the follow-up to 2007's hugely successful live-action/animation offering. To parents, the film is likely to feel like an innocuous but somewhat lazy cash grab, but kids (especially younger ones) will laugh and thrill on cue to the munks' latest exploits.

This story begins where the previous film ends; Alvin, Theodore, and Simon are world-touring mega-pop stars in the tender but exasperated care of their adoptive father Dave (Jason Lee). When Alvin's on-stage shenanigans land Dave in a Paris hospital, Dave decides his young charges need some regular life to combat their growing rock star egos. He sends them home for a dose of normalcy, complete with enrollment at the local high school. Of course, three tiny woodland creatures attempting to study, socialize, play dodge ball, and negotiate hallways with hundreds of full-sized (and heavy-footed) teenagers is anything but "normal." But this film, like the last one, wrings a lot of humor and charm from the idea that these three talented chipmunks are both an extraordinary novelty and also, psychologically, a lot like you and me (or our misbehaving children).

Life at home in Dave's absence does not go entirely as planned. The aunt who had agreed to care for the chipmunks is injured while picking them up at the hospital, leaving Dave's videogame-obsessed man-child cousin, Toby (Zachary Levi), officially in charge. Toby ... 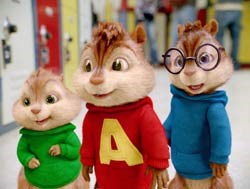