When one brother is presumed dead in the war in Afghanistan, the other steps in to help his family in this impressively acted American remake of a Danish film.
Brett McCrackenDecember 4, 2009
Our Rating

At first glance, Brothers feels like it should be a soap opera. Here's the setup: Sam Cahill (Tobey Maguire) is an upstanding, red-blooded Marine captain being deployed to Afghanistan, leaving his beautiful wife Grace (Natalie Portman) and two daughters behind in idyllic suburbia. At the same time, Sam's brother Tommy (Jake Gyllenhaal) is released from prison. He's the family blacksheep—into drugs, drunkenness and petty theft. In Afghanistan, Sam's Black Hawk helicopter is shot down. He's presumed dead, and Grace and the family hold a memorial service stateside to say goodbye.

The now widowed Grace tries to press on and raise her girls without their father. Uncle Tommy, meanwhile, steps in to help Grace raise little Isabelle and Maggie, and in the process discovers that he actually likes the world of fatherhood. He softens, cleans up his act, and even renovates Grace's kitchen. Everything lines up for the once-shunned Tommy to become the new father to the girls and maybe husband to Grace. But then Grace gets a phone call. Her husband Sam is alive, just rescued from an Afghan prison camp. He's coming home, but to a much more complicated family situation. And after experiencing some truly horrific things in Afghanistan, Sam's a much more complicated man.

But lest you expect that this scenario translates into a sordid, melodramatic love triangle out of the Days of Our Lives script archive, you should know that Brothers is a nearly scene-for-scene American remake of a 2004 Danish arthouse film directed by Susanne Bier (After the Wedding). That film was less about sensationalism than it was about subtlety and Nordic restraint (echoing the Dogma style of Lars von Trier, but with a kinder touch), and for the most part the ... 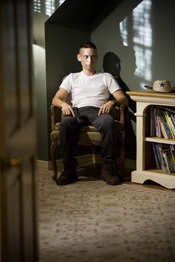