With his latest CD, rapper John Reuben wears his heart—and his struggles with faith and doubt—on his sleeve.
Robert HamDecember 22, 2009

To hear John Reuben's music and to see his goofball videos, you wouldn't necessarily pin the 30-year-old rapper from Columbus, Ohio as being one of the more thoughtful voices in the Christian hip-hop scene. Yet, even in the most easygoing track of his elegantly produced and deeply funky sixth album Sex, Drugs and Self-Control, which releases today, Reuben proves that the currents of faith and struggles with both modern society and modern Christianity are flowing freely. Reuben took time out of gearing up for his early January tour to give Christianity Today some insight into the inspirations and questions that fueled his latest creation.

I found some footage online of you rapping in a church when you were 13. Is it safe to say that you have been into hip-hop for most of your life?

Yes it is. That video is not the greatest performance. I was tooling around with it when I was young, probably even a little younger than that. Whenever I got the opportunity to perform, I would do it. And when I got older, that's when I would go to open mics and try things out.

What was it about hip-hop that interested you so much?

I thought it was very creative. When you're young, you don't really think about that stuff too much. Something either registers or it doesn't. For me, at a young age, I didn't listen to rock; I would listen to mostly hip-hop stuff. And for whatever reason, I was into writing. I would put poems together and had a few of them published. So, something about the lyricist and wordsmith putting together really creative rhymes and sounds alongside really cool and vibe-y music is kind of what got me.

But your mom was running a record label that released heavy metal. Did that not interest you at all?

As I got older I had an appreciation ...

Join in on Facebook
Tags:
None
Posted:
December 22, 2009
More From:
Robert Ham 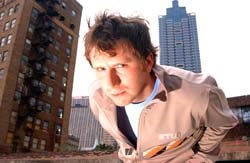