So much beauty and talent—not to mention the lush Italian countryside—grace the screen here. Too bad it's also so much wasted potential.
Camerin CourtneyDecember 18, 2009
Our Rating

Guido Contini (Daniel Day-Lewis), like the movie Nine, faces great expectations. Contini, a world-famous and beloved film director in 1960s Rome, is a mere ten days from shooting his highly anticipated ninth movie, Italia. Nine, the grandiose musical directed by Chicago's Rob Marshall, is bursting at the seams with beautiful talent—and recently was nominated for five Golden Globe Awards. Sadly, despite all this promise, both Contini and Nine disappoint.

Contini's problem is that he hasn't written one word of his script. Plagued by the huge success of his earlier films and the sting of his recent flops, Contini is creatively paralyzed. He does his best to dodge his producer and the flock of paparazzi that circle him everywhere, and finally escapes to a small Italian villa to write. He coos to his longsuffering wife (Marion Cotillard) that she shouldn't bother herself with joining him, then welcomes his longtime mistress (Penelope Cruz) with open, ahem, arms.

As he attempts to pen greatness, Contini also balances the many women in his life, hoping to draw inspiration from these various muses. Besides the aforementioned women, he also chats regularly with his beloved but deceased Mamma (Sophia Loren); remembers with fondness the prostitute of his youth, Saraghina (Stacy Ferguson, a.k.a. Fergie); gleans wisdom from his costume designer and confidante Lilli (Judy Dench); faces temptation from American journalist Stephanie (Kate Hudson); and wonders what could have been with his leading lady Claudia (Nicole Kidman).

Of this latter list of women, both Mamma and Lilli are given a bit more substantive roles, seeming to offer the only wisdom and morality in Contini's life. The other women seem sandwiched in merely for the eye ... 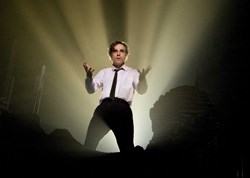