Though this adaptation is sometimes incoherent, it’s nonetheless quirky, intelligent, action-packed, and lots of fun, thanks in large part to Robert Downey Jr.’s portrayal.
Russ Breimeier|December 23, 2009
Our Rating

This is definitely not your father's version of Sherlock Holmes … or your grandfather's, for that matter.

The intensity and action of the opening ten minutes make that perfectly clear. Gone are Holmes' deerstalker hat and the stoic, reserved demeanor. Instead, we see the world's most famous detective racing through the dark streets in comparatively disheveled attire before engaging in some serious brawling action to apprehend the murderous occultist Lord Blackwood.

Would it surprise you to learn that this new Sherlock Holmes is just as true to the original stories by Sir Arthur Conan Doyle as any Basil Rathbone version, if not more so?

Holmes could be viewed as the late 19th century equivalent of a comic book superhero. His legendary deductive reasoning, his superb scientific skills, his gift for disguise, and his experience in martial arts and bare-knuckled street-fighting are all part of this status—and they're straight from Doyle's writings and all are faithfully depicted here. It's the energy behind the storytelling that's changed.

During the film, I thought that Holmes shares much in common with Batman—they even both have utility belts. And if the Dark Knight can survive different interpretations over his 70 years of comic book history, then why not a slightly different but still faithful take on Holmes after 120 years?

As for Robert Downey Jr.'s look as Holmes, Doyle describes him as "eccentric" and "bohemian"—both perfectly describe this new portrayal. In one scene, Holmes seems to use a hallucinatory drug to gain insight into his enemy's plan—also consistent with Doyle's depiction.

Watson here also differs from his traditional Hollywood portrayal. Doyle's stories never depicted him as the portly, befuddled sidekick; he's originally described as a veteran of the Afghan war, thin, strong, and packing a revolver. Yes, he's a foil to Holmes' intellect, but more as an intelligent everyman for the detective to play off, not merely for comic relief. (Interestingly, their relationship closely resembles that of House and Wilson on TV's House, and of course, the medical mystery program was originally modeled on Holmes and Watson.)

Other familiar details are still present here: the flat at No. 221b Baker Street, landlady Mrs. Hudson, Watson's soon-to-be wife Mary Marstan, Inspector Lestrade of the Scotland Yard, and even Irene Adler, the beautiful and mysterious woman who bested Holmes and stole his heart in one classic short story. Really, the only significant unfamiliar character in this movie is the aforementioned Lord Blackwood, ironic considering how quickly the movie dives into the story, as if Holmes has a long history with his nemesis.

Nevertheless, Blackwood is caught and sentenced to death, but before his execution, the satanic serial killer foretells of his resurrection to Holmes and promises more murders. Blackwood is hanged and Watson confirms his death, yet sure enough, days later, Blackwood's tomb is open, his body is gone, and suspects connected to him begin die. Can Holmes explain the resurrection, or is there really something supernatural at work? And is it all somehow connected to the mysterious reappearance of Irene Adler in London?

Contrary to the trailers' depiction, Holmes is not all action. There is indeed a mystery at the heart of it—a good one, not a great one—involving Blackwood's obsession with the dark arts and a shadowy conspiracy. There's also plenty of British humor—some dry, some silly—along with some scenes of heart in the bond between Holmes and Watson, their friendship seemingly threatened by the intrusion of Watson's fiancée Mary.

The film's greatest strength is Downey's performance. His natural charm and charisma is perfectly matched here in a role that demands intelligence, physicality, and a measure of quirkiness. Some of Downey's mannerisms and facial expressions are a hoot, but rest assured, he inhabits this role perfectly.

Director Guy Ritchie and the screenwriters also deserve credit, most notably for how they've visualized the detective's thinking. Though overplayed, it's cool to see Holmes "flash-forward" his punches in a brawl, much like a chess player anticipates his upcoming moves. There are also scenes where the camera darts about the room, showing us the details that Holmes notices. Sometimes we keep up, but more often we're behind, as it should be—after all, we should never be a step ahead of Holmes, right? Similarly, there's a fun bit that demonstrates how Holmes quickly improvises a disguise to gain information. 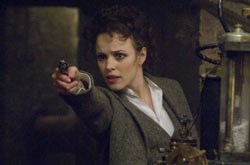 My favorite scene shows Holmes waiting in a restaurant, completely uncomfortable because he can't turn off his powers of keen observation. Sights and sounds overwhelm him, explaining not only his eccentricity, but his tendency to live as a recluse. That's inspired moviemaking, saying so much with so little.

The other performances are fine, particularly Jude Law as the no-nonsense, butt-kicking Watson. But Rachel McAdams is somewhat wasted in the underdeveloped role of Irene Adler, which ties in to one of the film's weaknesses. The script assumes viewers are well versed in Holmes lore—especially for Irene. Many won't know what to make of her at first, but will eventually discern she is the Catwoman to Holmes' Batman.

That's just one example of poorly introduced characters, and since this movie hits the ground running, it'll leave many feeling a little bewildered. It's not too hard to catch up and jump back in, but there's an investigation to keep up with too.

The dialogue is at times is too clever for its own good. It's hard enough to follow an intricate mystery without listening to actors mumbling plot details and punch lines in thick British accents—Downey is often the worst offender. You may end up enjoying Holmes more at home on DVD with the subtitles turned on.

As good as Ritchie's work is here, one wonders how this film would've been in the hands of a director like Chris Nolan (The Dark Knight, The Prestige). But overall, this version holds up rather well as a crowd-pleaser that does justice to the beloved character, leaving you wanting to see more, especially since it so blatantly sets up a potential sequel. I'd say that means "the game is afoot."

Sherlock Holmes is rated PG-13 for intense sequences of violence and action, some startling images and a scene of suggestive material. The action is plentiful, including gunplay and fist fighting, but there's minimal blood. Several pig carcasses are shown graphically at a slaughterhouse. There are satanic/occult references throughout. One of Blackstone's would-be victims attempts to stab herself in a hypnotic trance during a ritual, but is rescued at the last minute. Other less fortunate victims are drowned or set on fire, and a corpse is seen with maggots on his face. The "suggestive scene" comically involves Holmes tied naked to a bed, but nothing is shown. There's a scene with implied drug use on Holmes' part. Language is not an issue except for one possible f-bomb (as part of the background dialogue, so it was hard to tell).