The setting itself recalls the era of the Apollo project, that remarkable period during which, over a three-year span of time between 1969 and 1972, a dozen Americans walked on the moon. Not coincidentally, at least as regards Moon's milieu, it's also the era of philosophically serious science-fiction films like 2001: A Space Odyssey, Silent Running and Solaris, the influence of which is consciously at work in Moon. There is also a connection to Blade Runner (though not in terms of mood, structure or look).

Yet where these films dealt with apocalyptic, transcendent or large-scale phenomena, Moon engages similar questions of identity and human nature on a smaller scale. Nothing more is ever at stake in the actual onscreen events than the lives of a very small number of characters, although the film explicitly indicates a larger scope of issues. While it doesn't look like a $50 million film, you wouldn't guess Moon was made for just a tenth of that figure—especially with a premise that requires a special-effects set piece for an ordinary game of Ping-Pong.

A great deal of the credit goes to the impressively fluid contributions of Sam Rockwell, who grounds the film's emotional contradictions and disconnects in bruised working-class stoicism and a sly streak of humor. Rockwell plays Sam Bell, an astronaut and mining contractor nearing the end of a three-year term at the Sarang lunar base on the far side of the moon. Sam's job involves monitoring a trio of roaming mining units (nicknamed Matthew, Mark and Luke) ... 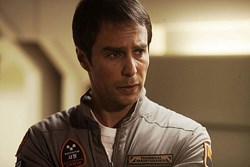