Lots of gross-out humor and a consistently lowbrow take on the Book of Genesis make this raunchy comedy one of the most disappointing Bible-themed movies in decades.
Peter T. Chattaway|June 19, 2009
Our Rating

It had to happen eventually. It has been five years since The Passion of the Christ brought the Bible epic back to the big screen, and nearly four since Judd Apatow began producing and directing a string of raunchy comedies—a few of which, such as the musical pseudo-biopic Walk Hard, have dabbled explicitly in genre parody. It was only a matter of time before Apatow or someone like him turned their attention to the religious epic, and the result is Year One, a buddy comedy that takes a relentlessly lowbrow look at the Book of Genesis.

Written and directed by Harold Ramis, who had small roles in Walk Hard and Knocked Up but may be best known as the director of Caddyshack and Groundhog Day, the new film takes at least some of its ideas from non-biblical sources, too. The story centers on two men who are expelled from a village of prehistoric hunter-gatherers, and if the film as a whole is tapping into a trend that began with The Passion, then the opening scenes bring another Mel Gibson movie, Apocalypto, to mind, as one of those men takes part in a wild boar hunt.

Alas, the man in question, Zed (Jack Black), is a tad clumsy and has a habit of spearing his fellow villagers rather than the animal that they are pursuing—but this is not what gets him expelled from the village. Instead, he breaks "the rules" when he goes to the Tree of Knowledge and eats some of its forbidden fruit, hoping the fruit will make him smarter. For this and other transgressions, Zed is sent into exile, and he is joined by his reluctant best friend Oh (Michael Cera), a shy, timid gatherer who talks to the berries he picks.

Thus begins their journey into the early chapters of Genesis. Two of the first people Zed and Oh meet are Cain (David Cross) ... 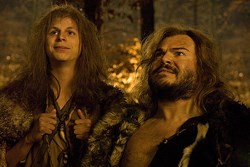