With the re-release of Toy Story and Toy Story 2 (in 3D!) for a limited theatrical run, we are reminded of the genius of Pixar's excellence from the very beginning: Story, story, story.
Bob Davidson|October 1, 2009

I'm going to make an assumption. You've seen 1995's Toy Story and its 1999 sequel, Toy Story 2. You're one of the millions who enjoyed the adventures of Sheriff Woody, Buzz, and friends. And now Toy Story 3 is waiting in the wings, set to release in June 2010. If that feels too far off to satisfy your Pixar fix, the folks at Disney (who acquired Pixar in 2006) have a treat for you—a double feature experience beginning Friday: Toy Story and Toy Story 2… in 3D!

Let's call it what it is. Toy Story has—in a mere 14 years—become a "classic." It represents not only the birthplace of Pixar's imaginative journeys, but the turning point of the entire world of CGI animation. With the vision and direction of John Lasseter (now Pixar's Chief Creative Officer), Toy Story became the first feature-length film to be fully computer generated. The animation world was forever changed. Studios such as DreamWorks Animation (Shrek, Kung Fu Panda) and Blue Sky (Ice Age, Horton Hears a Who!) began to emerge in hopes of tapping into Toy Story's magic—and its massive profits. But nobody has been able to match the consistent caliber of Pixar's feature films.

Since Toy Story, Pixar has grossed over $2.4 billion with a mere 10 feature films—an average of $240 million per film. Financial success aside, those first two Toy Story films have also received millions of thumbs-up, even from the critics. Both TS and TS2 hold the rare and coveted 100 percent "Fresh" rating at Rotten Tomatoes. Of the 10 Pixar films, Cars is the only one to dip below the 90 percent mark on the site, putting the Pixar franchise at an average of 94.5 percent, a benchmark any studio would drool over. 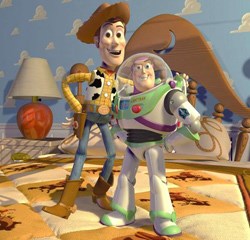