With the recent popularity of High School Musical and TV programs such as American Idol, So You Think You Can Dance, and Glee, it comes as no surprise that Hollywood would attempt to revitalize Fame. The 1980 original is an Oscar-winning classic that birthed a franchise: a popular TV show, hit singles, albums, a tour, a musical, and other forms of merchandising. Unfortunately, the film itself has aged poorly over the last three decades.

This reinvention gives Fame a modern makeover for a new generation and a chance to reboot the franchise. (Not to mention making it more family-friendly—the original was rated R, this is PG). The culture has changed significantly in 30 years. Gone are the cheesy synthesizers, leg warmers, post-disco pop music, and '70s racial tensions. Cue up the DJs, rappers, karaoke bars, multi-cultural arts, student diversity, and the Internet.

Even the nature of becoming famous has changed with the times. Through today's technology—computers, cell phones, Facebook, YouTube—a would-be starlet doesn't have to work hard to gain their 15 minutes of fame. But then stardom and notoriety are hardly the same things. As Debbie Allen used to say on the TV show, "Fame costs, and right here is where you start paying … in sweat." If only the movie explored this idea more fully.

Like the original, Fame loosely follows a talented group of young artists—singers, dancers, actors, filmmakers—as they diligently study their craft under tough-but-sympathetic instructors at the New York City High School of Performing Arts over the course of four years. It's a bit like a documentary told in four acts, bouncing between the various students and their experiences as they grow from nervous candidates ... 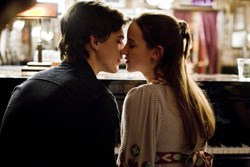