Steven Soderbergh's career as a filmmaker is a study in dichotomies. I don't mean he alternates between different genres, the way the Coen Brothers might. I mean he makes his different films using entirely different aesthetics, as though for completely separate audiences. Beloved by IFC for his remake of Andrei Tarkovsky's Solaris, esteemed by the Academy for smart, grown-up movies like Traffic and Erin Brockovich, and revered by critics and festival-goers for audacious works like his four-hour Che biopic, Soderbergh nevertheless remains best-known to typical moviegoers for a series of hiply commercial, crowd-pleasing caper films—Ocean's 11 and its two sequels.

For his latest, The Informant!, Soderbergh's mainstream savvy and arthouse panache collide like never before, into what is arguably the most quintessentially Soderberghian film yet, and inarguably a fine synthesis of his varying styles and aspirations. Coming off the heels of the mammoth Che and the similarly artsy, festival-friendly The Girlfriend Experience, Soderbergh would be forgiven for taking a breather with something light and uncomplicated, but The Informant!, though engaging and winsome and on a comparatively small scale, is not that movie. It's a comedy that will appeal to cineplex-goers who have no interest in four-hour biopics or remakes of Russian films, yet it utilizes Soderbergh's gifts as an arthouse film buff as effectively as anything he's made.

Nobody else makes movies like this anymore, and for that reason alone it feels initially like a rather strange picture, though actually there's nothing that weird about it; it's simply out of time, almost completely. It's set in the early 1990s, but the washed-out opening titles and the playful music that begin the film suggest a lost reel from the '70s. From there, the movie plays out as part character study, part pitch-black comedy, all with a strong moral compass, and, like 2007's Michael Clayton, the full package is so devoid of flash and gimmick, so focused on the basics of character and story, that it feels out of step with most of the rest of 2009's wide-release fare.

Oceans alum Matt Damon stars as Mark Whitacre, a scientist-turned-businessman working for an agricultural firm that rather quietly, and with no cause for alarm, comes under the scrutiny of the FBI. No one is in trouble, yet Whitacre feels a guilty conscience nonetheless. He confesses to FBI agents Shepard and Herndon (Scott Bakula and Joel McHale) that there are some shady dealings at the firm, and soon he finds himself wearing a wire, covertly videotaping business meetings, and informing the feds of all the illegal activity he witnesses.

The story spans a decade and takes some twists and turns that are surprising, to say the least; revealing much more about the plot would do the reader a disservice. What I can say, however, is that Soderbergh unfolds this story masterfully. His Whitacre is a stream-of-conscious day dreamer whose bizarre interior monologues provide the narration for the first part of the movie, but they don't reveal anything about the plot, just about the total self-absorption and general obliviousness of the central character. This establishes the movie's oddball sense of humor and its own awkward rhythm, and from there Soderbergh gradually peels back the layers and shows us what's really going on, outside of Whitacre's half-baked fantasies. The revelations are shocking, grim, and hilarious.

For much of the hilarity, we can thank Damon. This is his best work yet; the fact that he gained thirty pounds and grew a dorky moustache to play this part is superfluous next to how fully he disappears into the role. His embodiment of Whitacre—both his virtue and his delusion—is complete. The viewer immediately forgets that it is Damon. 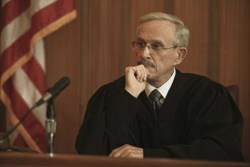 For the grim insight, though, we thank Soderbergh and screenwriter Scott Z. Burns, who adapted the film from a book by Kurt Eichenwald. The great triumph of the movie is not that it is so witheringly funny despite its heart of darkness, nor that its black comedy is so winsome and appealing, but that it so covertly uses Whitacre as a mirror for our culture—and for us as people. We initially applaud him for his strong acts of conscience, but as the story grows deeper and more complex, we begin to laugh at his own sense of entitlement, his false sense of goodness, his self-delusion—and then we are hit, quite uncomfortably, with how much of ourselves we see in him.

The film itself turns out to be more virtuous than Whitacre is: It uses the illusion of storytelling in service of a total commitment to truth-telling. As such it is not cynical, but doggedly honest. It is also very dark, and the humor leaves scars, but humor it remains, and the whole thing is uproariously funny. They should make more movies like this. Until then, Soderbergh's film is a gem; it's one of his finest works, no matter which camp of cinema-lovers you find yourself in, and its autonomy from current mainstream trends makes it that much more indispensable.

The Informant! is rated R for language. In comparison to other R-rated movies, the language here is actually fairly tame, mostly restricted to a couple of scenes, though it is still unsuitable for children.