The first film from writer/director Derrick Borte builds on an innovative scenario to pinpoint problems with our materialistic culture in a serious, yet entertaining way.
Alissa Wilkinson|April 16, 2010
Our Rating

A new family has moved into town. They're the embodiment of the American dream: handsome, charming Steve Jones (David Duchovny); his beautiful, fit, friendly wife Kate (Demi Moore); and their two attractive, popular teenagers, Jenn (Amber Heard) and Mick (Ben Hollingsworth). They've taken up residence in an enormous house equipped with the latest amenities, with a couple of nice cars in the driveway. They throw the best parties, serve the best food, play the best golf, and have the most fun.

And naturally, everyone in town wants to, well, keep up with the Joneses.

But the town doesn't realize that they're doing precisely what they're supposed to do. The Joneses aren't who they appear to be. In fact, they're not even related to one another. They're a group of salespeople hired by a company to advertise their clients' high-end products—to make the people around them want what they have. They're selling a lifestyle, not a product. And the town is falling for it. 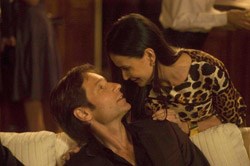 Is it a deceptive life? It's hard to tell. After all, they are actually living this life—playing the golf, driving the cars, throwing the parties. The "family" life inside the house doesn't quite match the outside appearance, but on the other hand, whose does? However, not everyone takes to this type of double life very well, and that mental toll threatens to take down the "family" entirely.

It's a fantastically inventive plot concept, but one that could have easily gone gimmicky, played solely for laughs and groans. Thankfully, in the hands of first-time writer/director Derrick Borte, the story is subtle, believable, even disturbing. What's most alarming is its familiarity—the unbridled but genteel materialism, the fragmented and alienated relationships, the very fine line of difference between this fake family and the real ones in the houses next door. 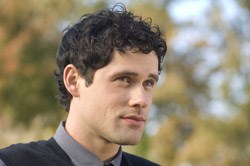 After the film, I overheard one critic describe it as "near-future" to a friend. But then he corrected himself. "Well, who knows," he said. "This kind of thing could be going on right now." Indeed. But it's even more disturbing how many of us willingly turn ourselves into not paid, but voluntary—no, paying—advertisers of products. Consider the designer logos plastered onto everything from $20 American Eagle T-shirts for pre-teens to $800 Chanel handbags for grown women.

And the point was duly proven; I found myself pitying the on-screen schmucks spending themselves into oblivion, but then caught myself feeling a little envious. (Consider that the products in the films had to be placed and paid for by their manufacturers, and it's another layer of hopefully-intentional irony.) I too would love to have an airy living room or a killer Yves Saint Laurent cocktail dress, though I live in a tiny studio apartment and shop off the sales rack. The materialism The Joneses skewers is not just a desire for stuff—it's the belief that stuff can, in fact, produce the good life. 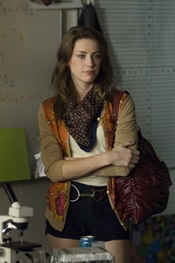 The tale unfolds carefully and intelligently, placing its breadcrumbs carefully, but still surprising us halfway through. Duchovny and Moore, both of whom have had some difficulty at the box office in the recent past, turn in nuanced performances. They seem at home with their characters and their chemistry. When the film falters, it's because it sometimes pokes too much easy fun at the Joneses' fawning neighbors. But everyone turns out to be human in the end (except, perhaps, the boss, played by the venerable model/actress Lauren Hutton).

This cautionary tale is apropos to its time. Much of our current economic situation is due to the many consumers who believe that they deserve "the good life" (and banks all to willing to finance it)—and that life means having great stuff, whether or not they can actually pay for it. Sadly, that mentality shows no sign of fading. But rarely is this kind of brutal truth seen on the movie screen in such a subtle and—dare I say?—entertaining film as The Joneses.

The Joneses is rated R for language, some sexual content, teen drinking and drug use. The language includes a number of f-bombs. There is an extended scene of female nudity following a botched seduction attempt. Other characters do actually have sex, though it is not graphic. A character cheats on his wife. A male character tries to kiss another male character and gets beat up for it. Teenagers drink heavily at a party and smoke pot. A man drowns in a pool.

1 of 3
David Duchovny as Steve, Demi Moore as KateBen Hollingsworth as MickAmber Heard as Jenn