This remake is cheesy, preposterous, silly, and completely fun thanks to the chemistry and charisma of the crack commando unit.
Todd Hertz|June 10, 2010
Our Rating

The opening sequence of The A-Team is geeky, cheesy, corny, preposterous—and completely wonderful. I couldn't stop smiling. And I think I'd feel that way even if I hadn't been a child of the '80s and a fan of the TV show. It wasn't just the nostalgia (The van! The helicopters! The dramatic cigar lighting! Pity the fool!) that pulled me in. Instead, this goofy action movie's first minutes establish a natural charisma, chemistry, and style even before the giant "A" is shot off the screen.

While the movie's overall execution and quality fades as it goes—and the clunky plot increasingly crowds out some of the fun—it's all still big, silly fun (wasn't the source material, too?).

That the cast is made up to look ridiculously akin to the original Hannibal, Face, Murdock, and B.A. Baracus is just the surface. That the writers lovingly wrote those same characters—down to the smallest traits and quirks (like Murdock's affection for hand puppets) lends authenticity. But what makes the whole movie tick is the chemistry, interaction and dynamic between these four friends and comrades. They make the movie fun because they are a blast to hang with.

The movie opens mid-action as this crack team of commandoes' leader Hannibal (Liam Neeson) is on mission with his number two, Face (Bradley Cooper). They soon meet and recruit driver/mechanic B.A. Baracus (Quinton "Rampage" Jackson) and pilot Murdock (Sharlto Copley) onto their team. The film then skips eight years to put us into the current plot, which is basically: Going to jail for a crime they didn't commit, escaping, and clearing their names. The actual events center on a MacGuffin which various parties are chasing. Unlike the TV show, in which the A-Team was all about ... 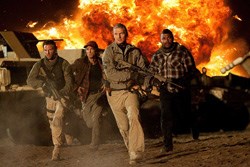