Bruce Marchiano, who played the Son of God in 1993's Matthew, now wants to make a film based on the Gospel of John. But he needs a few dollars—45 million, in fact.
Mark Moring|June 22, 2010

In 1993, Bruce Marchiano starred as Jesus in The Visual Bible: Matthew, bringing lightness and humor to a role that many viewers embraced, saying they'd never seen the Lord portrayed in so human a manner in film.

Matthew was supposed to be the first of many films covering all 66 books of the Bible, each using dialogue taken verbatim from Scripture. Acts came a year later, also with Marchiano playing Jesus (and James Brolin as Simon Peter).

Marchiano says that one of the original investors—a group of eight South Africans who put up $800,000 to make Matthew—brought the idea for future films to some North American distributors and investors, first in the U.S. and then in Canada, and eventually, "everything broke loose," he says. "And then [Matthew] got pirated by some Hungarian company, all while I was on the sidelines, hearing about everything second hand. Watching it get kicked around like a can of soup was heartbreaking. It all got very ugly."

Ownership disputes and lawsuits abounded in a drama far too complex to detail here, and for all intents and purposes, the Visual Bible series idea is dead. But Marchiano never gave up hope of doing another Jesus movie someday, even if he had to do it on his own. And that's just what he plans to do next, with a word-for-word adaptation of the Gospel of John.

He's got a title: Jesus: No Greater Love. He's got a script. He's ready, even at the age of 54, to play the Son of God again, if needed. He just needs money—$45 million, in fact. Marchiano is appealing to regular folk all over the world to join a global community of "producers." He's hoping for 4.5 million people to put up $10 each to fund the film. 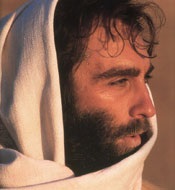