Despite an all-star comedy team (Adam Sandler, Kevin James, Chris Rock, and more), this "family" flick is too juvenile and crass for viewers of any age. Ugh.
Josh Hurst|June 25, 2010
Our Rating

I'm a bit confused about Grown Ups. It's not that the movie is complicated, nor is it profound: It's just that it sends mixed signals. I can't figure out who the film was made for, who is supposed to actually enjoy this movie. And that's a bummer, because at first I thought it was me. See, Grown Ups is a comedic reunion—both on and off screen—between Adam Sandler, Chris Rock, David Spade and Rob Schneider, the so-called "Bad Boys of Saturday Night Live," whose antics and bawdy humor I grew up watching on that show (whenever my mother would let me). Kevin James is added to the mix, too, which is fine by me; I thought he was terrific in Hitch.

But no: This is not a glorious return to mischief. For these Bad Boys are now, well, Grown Ups, with wives and kids to think about. So it's no major surprise that this is something of a "family" flick, especially in that it's literally about family, specifically the families of five boyhood friends who reunite after the death of their beloved childhood basketball coach. Their lives have gone in totally different directions, but upon seeing each other again they realize that their camaraderie hasn't diminished one bit—so they decide to spend a weekend in an old lake house, enjoying the great outdoors with their various family members in tow.

You can probably guess what happens. Old friendships are rekindled, and tempers sometimes flare, but, after some soft piano music plays in the background and a few well-meaning clichés are passed around, everything goes back to the way it was, poignant lesson learned. Our characters learn that there is more to life than work, that family is really important, that it's an admirable thing to be a good loser, etc. And they get ... 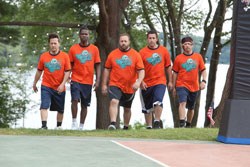