Despite the star power and onscreen chemistry of Cruise and Diaz, this wild and crazy action/comedy just has too many holes to work well.
Steven D. Greydanus|June 23, 2010
Our Rating

It starts in an airport with bubbly June Havens (Cameron Diaz), on her way to her sister's wedding, literally running into smooth-talking Roy Miller (Tom Cruise)—not once but twice, which makes it look like one of them is doing it on purpose, and it's not June.

Roy helps her pick herself up and gather her luggage—twice—and then an odd thing happens: Roy boards the plane, and June, supposedly booked on the same flight, is told that her boarding pass is wrong and she's not on that flight after all. "Sometimes things happen for a reason," Roy tells her as he boards alone.

Meanwhile, in some intelligence command center, security footage of Roy colliding with June is being carefully reviewed, and it looks like he's slipping a MacGuffin into and out of her luggage. Could they be in cahoots? The agents decide to keep the two of them together, and suddenly June is told that they've found her a seat after all. No wonder: The flight is nearly empty. After some flirtatious banter, June heads to the ladies' room to freshen up and gather her nerve to put a move on Roy. What she doesn't know is that every other passenger on the flight is an enemy agent gunning for Roy—and that Roy is a superspy, possibly rogue, capable of dealing with almost any number of assailants.

All this in the first ten minutes or so. In broad strokes, not necessarily a bad set-up for a frothy action-comedy-romance with echoes of movies from Mr. & Mrs. Smith and True Lies to Romancing the Stone and Charade. Credible star power, exotic locales, energetic set pieces and a tongue-in-cheek tone that never takes itself too seriously supply many of the right ingredients. Some of the action scenes have panache. I like June wearing a bridesmaid gown ... 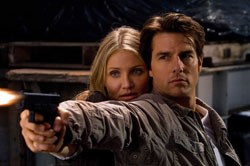