There are no limits to the cruelties that humans inflict on one another, and slavery—particularly the trafficking of children—may be at the apex of depravity. An estimated 27 million are enslaved worldwide. Jody Hassett Sanchez's documentary Sold (Pointy Shoe Productions) profiles three rescuers—a Hindu, a Christian, and a Muslim—who are trying to make a dent in that number.

"When we do prostitution, we see only hell," says Manisha, a sex slave rescued by Sunitha Krishnan, a former Hindu nun. Trapped indoors for two years, Manisha is one of many women and girls rescued from brothels in India by Krishnan, who helps the girls find fulfilling work and dignity. Though she's been beaten for her work, Krishnan stays driven by righteous anger—an anger that's refueled when she hears stories like that of an 8-year-old girl locked in a room with a snake until submitting to prostitution. Krishnan jokes that she worships Ganesh (a Hindu god known as the "Remover of Obstacles"), because "he's like me, very temperamental, very dominating and loving, too."

Mercy and healing drive Symphorienne Kessouagni, a Christian working in Togo, West Africa, where she cares for 17 former child slaves, providing shelter, nutrition, education, and more. Painted near the entrance of her home and school is Psalm 34:9: "Fear the Lord, you his saints, for those who fear him lack nothing."

Kessouagni rescues mostly domestic slaves, like Moise, whose family sold him into market slavery when he was 4 years old. He spent years hauling heavy loads as if he were a cart horse. Kessouagni reunited the boy with his mother, who can only say, "There was no other way for us to survive." It's not surprising, then, that Kessouagni teaches these ... 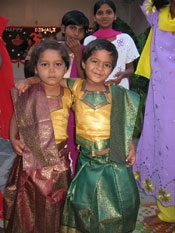