In what might be Pixar's best movie ever, Andy heads off to college while Buzz, Woody, and the rest of the gang face a new and more dangerous life.
Frederica Mathewes-Green|June 17, 2010
Our Rating

Toy Story 3 is as good as any movie Pixar Studios has made, and better than a few of them. But when you consistently achieve excellence, there's this problem: people start expecting more. A merely excellent movie is not enough. Each one must be more suspenseful, surprising, original, hilarious, and emotionally satisfying than the last. Each success becomes a rack on which the next attempt is measured.

Since some of the characters in Toy Story 3 are returning from earlier films, the challenge to make each film more original than the last was more difficult. So, as I watched, I tried to imagine how I'd feel about this movie if I'd encountered it first among the Toy Story series. I'd be tempted to say it's Pixar's best film, I think—though when I recall The Incredibles, Ratatouille, and Monsters, Inc., it's a close call. Toy Story 3 is excellent, as usual, but we've seen some of this excellence before. 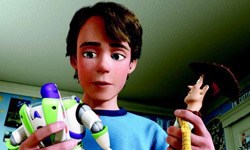 Andy has to decide what to do with his old toys

The film opens with a funny, exciting action sequence which introduces most of the toy friends. Cowboy hero Woody is trying to stop One-Eyed Bart (a.k.a. Mr. Potato Head) and Evil Dr. Porkchop (a piggy bank, but it's "Mr. Evil Dr. Porkchop to you") from sending a trainload of orphans (troll dolls) plummeting from a dynamited bridge. As terrific as this is, I was a little worried that Pixar had abandoned their human-scale storytelling for something more flashy. Never fear: this scene turns out to be in the imagination of their owner, Andy, about seven years old. (We're watching him play on a videotape his mom is making, recalling the delightful movie-within-movie openings of Monsters, Inc and Up.)

But as Randy Newman gravel-trucks his way through the beloved Toy Story theme song, at the words, "As the years go by, our friendship will never die," the music stops. It's ten years later and Andy is going off to college. His mom tells him that his room has to be cleared out, and everything sorted into containers for college, the attic, or trash. When the toys hear this, they are distraught; cowgirl Jessie says bitterly, "I shoulda seen this coming. It's Emily all over again." 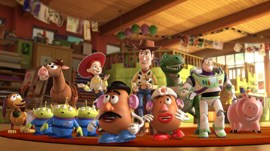 The toys check out their new pad

In Toy Story 2 Jessie told her story of being loved by a little girl, and then shoved under the bed and forgotten as that girl grew up. That forms the premise for one of the most extraordinary themes I've ever seen in a (supposedly) children's movie, that toys are supposed to keep on loving their owners even though their owners will tire of them. That's a profound thought, even for adults, and one that arises, with variations, in many Pixar films.

The band of toys ends up neither in the trash nor the attic but at a day care center, where the toys are ruled by a deceptively cuddly bear named Lotso (short for Lots-o'-Huggin' Bear; "He smells like strawberries!"). The newbies are thrilled to see toys being actively played with, and Lotso tells them that when the kids get older and move on, new kids come in and take their place. They will always be played with, but they don't have any particular owners. "No owners means no heartbreak," he says.

Lotso is the leader of the pack at the daycare center

However, Andy's toys don't end up in the room with the more-civilized older kids. They're put in the Caterpillar Room, where toddlers leave the toys abused, defaced, and broken (recalling the first Toy Story), while the toys that are in the know shiver in hiding (recalling the early Pixar short, Tin Toy).

It's no spoiler to say that the rest of the film is about how the toys try to escape. We've seen great escape or obstacle-course sequences in every Pixar film. There's nothing stale in this one; even when you can guess what needs to happen next, you won't be able guess how it happens. The dialogue is consistently ingenious, and the new characters (both toys and humans) are delightful and fully-formed. There's a side story of Barbie and Ken meeting and falling in love ("It's like we were made for each other!"), which is as hilarious as you'd expect, but it's also organically part of the story and not extraneous fluff.

Barbie and Ken were 'made for each other'

At one potentially perilous point, the tone turns suitably sober as well as genuinely suspenseful. There even comes a moment when the toys, believing there's no hope, turn to each other with brave smiles, grasp each others' hands, and accept what seems to be inevitable. It's a long, quiet moment, and I don't think I've seen anything like it in a so-called "children's movie." Usually the exciting moment-of-doom climax means only increasingly agitated music and choruses of "Oh no!" But leave it to Pixar to handle such a scene with surprising gravitas.

To say that some elements of Toy Story 3 are a bit familiar is not a complaint. There's always room for variations on an excellent theme. It's not like you're going to see this movie only one time, after all. This is one more Pixar movie you'll be glad to watch over and over again.

Toy Story 3 is rated G, which according to the MPAA means it "contains nothing that would offend parents for viewing by their children." There is one potty joke in the short, Day & Night, that comes before the feature. Nothing to object to in the movie itself, except that younger children may be frightened by some images. A windup monkey toy with bulging eyes and clapping cymbals, in particular, could be scary to little ones.