A grown-up Alice returns to Wonderland, where she is destined to battle the Jabberwocky and restore the White Queen's crown. But overall, the movie's a dud.
Frederica Mathewes-Green|March 5, 2010
Our Rating

This is not your grandmother's Alice. Though the title is the same, director Tim Burton did not film a new version of the classic novels by British clergyman and logician Lewis Carroll (1832-1898), Alice in Wonderland and Alice Through the Looking Glass. Instead, Burton and screenwriter Linda Woolverton have moved the action forward 13 years. Now Alice, almost 20, is attending a garden party where the unappealing son of a local lord intends to propose marriage. Fleeing him, and pursuing a white rabbit, Alice kneels at the base of a tree and peers down an immense hole. Then she falls in.

The seemingly-endless falling is well-executed, as Alice dodges various objects, including a grand piano. She lands upside-down on a ceiling, her hair standing on end. She falls to the floor and discovers she is in a small, round room—a dingy and decaying room, subtly ominous—and tries each of the doors that ring it. As in the book, she discovers a door that is too tiny for her to exit and drinks a shrinking potion; then discovers she has forgotten the key on the glass tabletop and nibbles a growing-cake to retrieve it; then drinks the potion to shrink again, and at last passes through the door. This entire sequence is excellent, though there is the one curious element that Alice's clothes do not shrink and grow with her, a convenience usually employed in such scenes. Instead, her clothing has to be adjusted each time, a problem which may occupy some viewers' thoughts more than is strictly necessary.

On the other side of the door Alice immediately runs into a crowd of odd figures—a Dormouse, Dodo bird, Blue Caterpillar, and the Tweedles—who launch into an absurd discussion of whether this is or is not the "right Alice." ... 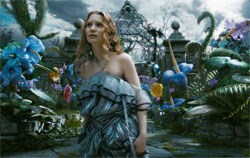